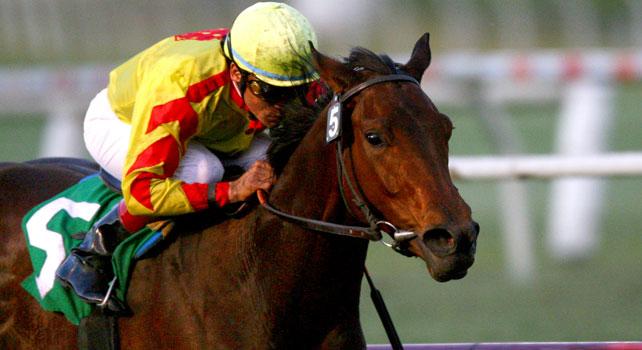 Making her first start of 2012, Turbulent Descent remained undefeated at Betfair Hollywood Park with a victory in the $72,570 Desert Stormer Handicap Sunday.

Idle since a poor performance in the Grade I La Brea Stakes last New Year’s Eve at Santa Anita, the 4-year-old daughter of Congrats took charge late for her fourth win over Cushion Track.

Several lengths off the quick pace set by Izzy Rules, Turbulent Descent raced in the clear after breaking from the outside, cruised up under jockey David Flores to get within range of the leader at the quarter pole and received a bit of left handed encouragement while overtaking Izzy Rules with about a sixteenth of a mile to run.

Owned by a partnership that includes Blinkers On Racing Stable, Robert Butler and William Strauss and trained by Mike Puype, Turbulent Descent, who is out of the Forestry mare Roger’s Sue, has earned $901,640. She was bred in Florida by Ocala Stud.

“You want to see her come back to form because she’s a brilliant filly,’’ said Puype. “Her campaign (in 2011) took its toll with four travel trips. She’s very partial to synthetic tracks and I’m just happy to have her back in form.’’

Flores, who also won the 2007 Desert Stormer with Selvatica, also referred to Turbulent Descent’s affinity for synthetic surfaces. In addition to her four wins over Cushion Track, she won the Grade II Beaumont by five lengths April 17, 2011 on Keeneland’s Polytrack.

“The outside post worked out very well for her,’’ said Flores. “She showed what she’s made of today. I’m so confident in her.

“The main thing with her is the track. I can’t say thanks enough to (Puype) and the owners.’’

She improved off her two previous starts –fifth place finishes in the Grade III Count Fleet Handicap April 14 at Oaklawn Park and Time To Leave Stakes May 6 at Betfair Hollywood Park.

The two other Grade I winners in the Desert Stormer failed to fire. Switch, who captured the 2010 La Brea and 2011 Santa Monica, was fourth, a nose behind Mildly Offensive, while Teddy’s Promise, the 2011 La Brea upsetter, was fifth, defeating only Grade II winner Great Hot.

The off-the-board finish was the first for Switch in six attempts over Cushion Track. Teddy’s Promise had won four of her previous six over the surface, including the Time To Leave.

In the day’s second race, jockey Saul Arias guided 35-1 shot Magic Mama to a come-from-behind win. The longest price in the field of seven fillies and mares, the 4-year-old Successful Appeal filly provided Arias, 33, with his first win at Betfair Hollywood Park since he took the eighth race Nov. 18, 2007 with 18-1 outsider Steelin.