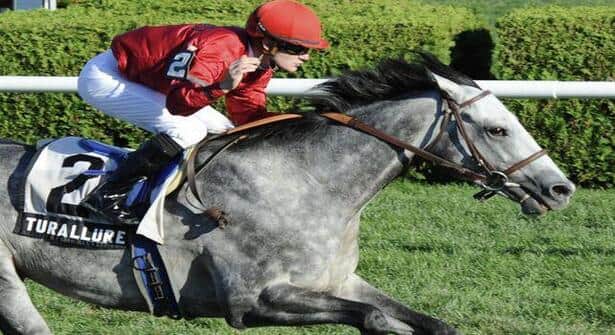 The track’s final major turf event of the year for older horses will be run at 1 1/8 miles on the Matt Winn Turf Course.

Keep Up, a lightly-raced 6-year-old son of Unbridled’s Song out of 1999 Kentucky Oaks winner Keeper Hill, rallied from 10th to win last year’s River City for trainer Alex Clarkson. It was the first graded stakes triumph for Keep Up, who prepped for a defense of his title in an Oct. 24 allowance victory on the grass at Keeneland. His two wins in six 2013 races also includes a triumph in Arlington Park’s Swoon’s Son on June 8

If he runs in the River City, the Charlie Lopresti-trained Turallure would be looking for his first victory in two years. He has lost 11 consecutive races since his win in the 2011 Woodbine Mile, a streak that started when he finished a nose back of Court Vision in the Breeders’ Cup Mile. The string of setbacks includes a narrow loss to Data Link in the 2012 Maker’s 46 Mile (GI) at Keeneland. His most recent outing was a late-running sixth-place finish in a field of 12 in an Oct. 18 turf allowance at Keeneland won by Regally Ready, winner of the 2011 Breeders’ Cup Turf Sprint (GI) at Churchill Downs.

Other notable nominees include Bob and Kathy Zollars’ Daddy Nose Best, 10th in the 2012 Kentucky Derby for trainer Steve Asmussen and winner of the Remington Park’s Remington Green and Edward DeBartolo Memorial in his last two starts; Stuart Janney III’s Air Support, winner of the 2012 Bowling Green (GII) at Belmont Park who has won five of 20 races and earned $963,619 for trainer Shug McGaughey; and Shadwell Stable’s homebred Najjaar, winner of Keeneland’s Sycamore for trainer Dan Peitz in his most recent race.