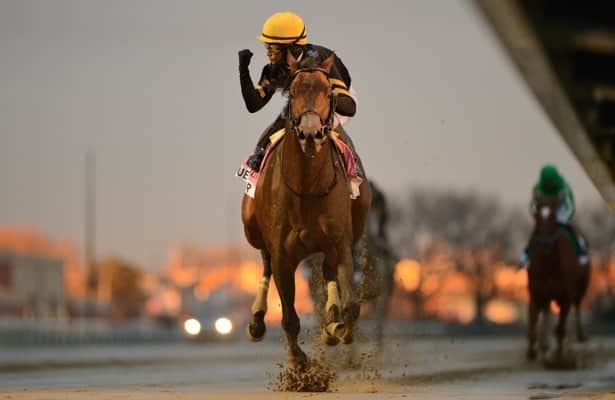 The 6-year-old son of Mineshaft took over coming off the turn of the season's final Grade 1 in New York and thundered home to a 5 1/2-length win. The victory was True Timber’s fifth in 29 career starts.

Jack Sisterson trains True Timber, who finished third in the 2019 Cigar Mile. He went off a 7-1 shot in this year’s edition of the race, which saw three of nine entrants – including Grade 1 winners Firenze Fire and Mind Control – scratch Saturday morning.

Jockey Kendrick Carmouche piloted True Timber over a sloppy Aqueduct surface that was sealed. The Calumet Farm runner settled into third place behind King Guillermo and Mr. Buff, who went through snappy factions of 22.89 and 45.82.

Carmouche moved True Timber forward through the turn, to the outside of the pace-setting pair. As the two early leaders gave way, True Timber was just finding his stride.

True Timber easily moved past King Guillermo and Mr. Buff and was never threatened from there. He made the mile in 1:36.49, paying $16.60 to win and earning Carmouche his first Grade 1 triumph.

An emotional Carmouche described himself as “the man on the moon today” in a post-race interview to “America’s Day at the Races.”

“I would just like to thank God so much to keep me fighting in this game and my beautiful wife and two kids who stuck behind me – my in-laws, my mom and dad, the whole nine yards,” Carmouche said. “It took me 20 years to get my first Grade 1. I’m just so joyful and so happy.”

Behind True Timber was runner-up Snapper Sinclair, who got home just ahead of 4-5 post-time favorite Performer in third.

True Timber’s last win prior to Saturday was an allowance optional claiming victory in September 2018 at Belmont Park. The veteran has run primarily in graded stakes company since then but had yet to make the grade, coming closest with a second-place effort in the Cigar Mile’s 2018 running.

In True Timber’s first five races of 2020, his best finish was second last month at Keeneland in the Lafayette Stakes. He contested that seven-furlong event after not making the Breeders' Cup Dirt Mile field.

“I think everything works out for a reason," Sisterson said. "He didn’t get in the Mile off the also-eligible list and the last race at Keeneland going seven-eighths was a great setup to run a one-turn turn mile at Aqueduct.”

“As soon as I got the horse, the Cigar Mile was a year-end goal," said Sisterson, who scored his first Grade 1 win in August when Vexatious took Saratoga's Personal Ensign Stakes.

"A lot of emphasis has to be put on how good a trainer Kiaran McLaughlin is. He had this horse before I did and had him sent him to me in such good shape. This really shows how good of a trainer he really is."

Snapper Sinclair finished second at 13-1 odds for trainer Steve Asmussen. The 5-year-old son of City Zip is a two-time Kentucky Downs stakes winner but still has not won a graded event.

“I was happy with the position that I got," said Manny Franco, Snapper Sinclair's jockey. "The pace in front of me was quick and I just tried to give my horse a breather. When I made my move, he really responded for me. I knew the horse in front had a lot and would be hard to catch, but my horse ran a great race.”

For Performer, the Cigar Mile marked his first defeat since his debut in November 2018 at Aqueduct. The 4-year-old Speightstown colt took a five-race winning streak into Saturday for trainer Shug McGaughey, but could not make it six in a row.

“He broke just OK and I was a little further back than I wanted," jockey Joel Rosario said. "It took him a little time to handle the track. Sometimes when the track is wet it's hard to come from where he was. He made his run from the outside and seemed to be comfortable there. But it was tough to catch up with the leader.”
Performer Snapper Sinclair True Timber Kendrick Carmouche Jack Sisterson Cigar Mile Cigar Mile (2020)