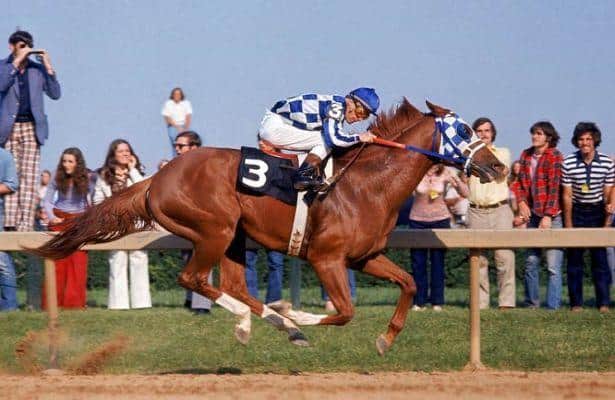 As American Pharoah has just completed the rare accomplishment of bagging a Triple Crown, he brings to this rarity of being the twelfth to do so.  Some people have been struck with the curiosity of how they would fare if they were pitted against each other.   Since the Daily Racing Form has provided the past performances of the past Triple Crown winners, we will take their times, and position them as if they are running against each other.  But first, let’s look at the history of the Triple Crown, and its possible co-existence with American history:

The first official winner of the Triple Crown was Sir Barton, in 1919.  This victory came six months after the ending of World War I.  The second, Gallant Fox, in 1930, and the third, his son, Omaha, in 1935, followed by War Admiral, in 1937, were in the midst of The Great Depression.  The 1940’s was dominated by World War II, and with that came Whirlaway(1941), Count Fleet(1943), Assault(1946), and Citation(1948).  At this point, there would be a 25-year drought before Secretariat(1973) would bring back the fervor of the Triple Crown fever, which would coincide with the ending of the Vietnam War.  Later in this decade, Seattle Slew(1977) and Affirmed(1978) would help us deal with a recession that came during the Jimmy Carter administration.  The longest drought has just ended, with American Pharoah, as our country is coming  to grips with terrorist activity.

And now, let us look at how our Triple Crown races may shape up to be.  It’s been three weeks since the Twelfth Of Never, and our first leg of the Triple Crown, is the Kentucky Derby, which falls on May 3.  As the horses are prancing on to  the track, it should be noted, that their saddle cloth number will be in chronological order(i.e. Sir Barton is No. 1).  Also, the times will be somewhat affected for No. 2 Gallant Fox and No. 3 Omaha(“Good” track); No. 1 Sir Barton(“Heavy” track); No. 7 Assault(“Slow” track); and No. 8 Citation(“Sloppy” track).  Now, without further ado.

AND, THEY’RE OFF!!!!!!  They all break in grand fashion as they are all battling for the front end.  There is no clear cut leader, but as they near the half-mile pole, Seattle Slew emerges with the lead, and has opened up four lengths on the rest of the field.  Affirmed comes away very nicely in second; back about a length is Count Fleet followed by War Admiral.  There’s a gap of five, as Citation leads the second wave; back behind him is American Pharoah.  Another gap of five finds Gallant Fox, Sir Barton, Omaha, and Assault.  Pulling up the rear is Secretariat and Whirlaway.

WE’VE GOT A HALF-MILE TO GO!!!!  Seattle Slew is clinging to his lead, but right on his flank is Citation!!!  Settling right behind him is Affirmed; another five back to American Pharoah. He’s got coming to him from the back of the pack, the tandem of Secretariat and Whirlaway!!!!  War Admiral and Count Fleet are dropping back.  Rounding out the group is Omaha, Gallant Fox, Assault, and Sir Barton.

THEY’RE NEARING THE STRETCH!!!!  Affirmed has wrested the lead from Seattle Slew.  Secretariat is an ever-present danger lurking in third.   Two lengths back of him is American Pharoah.  A big gap of six lengths finds still-charging Whirlaway.  War Admiral and Count Fleet settle in back of Whirlaway, and the rest of the field finds Citation dropping back, followed by Omaha, Assault, Gallant Fox, and Sir Barton.

AND AS THEY COME TO THE WIRE!!!, Secretariat has erupted to the front, as he pulls away, Affirmed will come away with the second place, nearly two lengths ahead of the closing Whirlaway.  Fourth will go to Seattle Slew.  Another five back to American Pharoah.  War Admiral, Count Fleet, Omaha, Citation, Assault, Gallant Fox, and Sir Barton round out the finish.

So, come May 17, we’ll be in Baltimore, at Pimlico Race Track, to see if Secretariat can defend his honor.  Here are the charts for the Derby:

Well, here it is, May 17.  The day has arrived, and it is a beautiful day for a horse race, and, in particular, the running of the Triple Crown extravaganza Preakness Stakes.  As the horses walk onto the track, the saddle cloth number  will be for alphabetical order.  So, No. 1 will be Derby runner-up Affirmed, and No. 12, will be Derby third place finisher, Whirlaway.  It should be noted, that horses that will have their times compromised, are:  Count Fleet, War Admiral, Whirlaway(“Good” track); Citation(“Heavy” track); and American Pharoah(“Sloppy” track).  The horses are nearing the gate.

The last to go in, will be No. 12 Whirlaway(moment of silence).  THEY’RE ALL IN LINE!!!!!(Bell rings) AND!!!!  THEY’RE OFF!!! And just like that, the field blasts out of the gate!!!  And, much like in the Derby, Seattle Slew zips right to the front!!!  And, now a fog is rolling in from Chesapeake Bay.  And, after a few moments, the fog is dissipating, and as things clear up, they are nearing the half-mile mark.  Seattle Slew has opened up a six-length lead!!!  American Pharoah emerges as the one that will hold second.  He’s clear by three over War Admiral, who is a neck in front of Count Fleet.  Right on his flank is Affirmed.  Four lengths back, and leading that tier of horses, is the Derby champ, Secretariat.  Behind him is Whirlaway.  Then rounding out the field is Assault, Omaha, Gallant Fox, Sir Barton, and trailing the field is Citation.

As they come to the 6 furlong mark, Seattle Slew has opened up a near-11-length lead!!!!  Secretariat has shot up to the second position!!!  Right behind him is American Pharoah.  Two lengths further back is Count Fleet, who holds a narrow margin over Affirmed.  It’s four lengths further back to Assault, who is a neck in front of War Admiral.  Five lengths back to Whirlaway, and rounding out the field is Omaha, Gallant Fox, Citation, and Sir Barton.

AS THEY NEAR THE HOME STRETCH!!!!  Seattle Slew’s lead is dwindling to five lengths, as Derby champ Secretariat seems to be in a drive mode.  He’s four lengths clear of Affirmed, who has widened the gap to ten lengths on War Admiral!!  American Pharoah is dropping back to fifth.  Settling behind him is Omaha and Count Fleet.  The rest of the field will consist of Gallant Fox, Whirlaway, Assault, Citation, and Sir Barton.

AND DOWN THE STRETCH THEY COME!!!!  Secretariat is now in full gear!!!!  As he blows by Seattle Slew to the wire!!!!  Affirmed comes rolling to finish in a dead heat for second!!!  It’s 20 lengths back to Count Fleet.  Next is four lengths back, to, yes, another dead head, between War Admiral and Omaha.  Then comes American Pharoah.  To finish up the order of finish, it will be Whirlaway; passing up tired horses is Sir Barton; Gallant Fox; Assault; and Citation, who was wearied by the “Heavy” track.

And now, the time has come!!! It’s June 7, and the whole racing world is wanting to know, “Can Secretariat pull it off?”  It should be noted, that Sir Barton did not have any fractions to be able to  decipher his whereabouts during the running of this race.  Also, his times were projected from the 1 3/8 race that he actually ran, to the standard mile and a half distance that we now know.  The saddle cloth numbers will be assigned according to most- to least-amount earnings.  Horses that had their time compromised, for this race, are:  Seattle Slew(“Muddy” track); Omaha(“Sloppy” track); and Gallant Fox(“Good” track).

Billy Joel warbles “I’m In A New York State Of Mind” as the throng roars.  The horses are in the post parade, and are now nearing the gate.

And, shooting out of the gate like he has no more time to wait to face his destiny, Secretariat is tackling this mile and a half marathon as if it were a sprint race!!!!(we now fast forward to the half-mile pole)  Secretariat is opening an astonishing 12 length lead!!!!  Up to be second, is War Admiral, who’s closely being shadowed by Count Fleet.  Another three back finds Seattle Slew, a nose in front of Citation!!!  Further back, we find American Pharoah, who is holding off Omaha.  A six-length gap finds Affirmed, Whirlaway, Gallant Fox, Assault, to close out the order, and Sir Barton is no where to be found!!!!

As we near the halfway point in this race, Secretariat is widening his margin to sixteen lengths!!!!  War Admiral moves into second, nearly three lengths in front of Count Fleet.  Right on his flank, is Citation, who has opened up five on American Pharoah.  Next comes Whirlaway, one length in front of a clutter of horses,  Assault, Seattle Slew, and Affirmed.  Closing out the field are Omaha and Gallant Fox.  And, there is still no sighting of Sir Barton.

As we near the stretch, Secretariat is moving like a tremendous machine!!!  He’s eighteen lengths up!!!  Will he run out of gas?!!!  Affirmed has taken over the second spot, four lengths clear of War Admiral.  American Pharoah is lurking one length back.  Citation is sitting comfortably in the next spot.  There’s a gap of seven lengths to Count Fleet, followed by Assault and Seattle Slew.  Closing out the field is Whirlaway, Omaha, and Gallant Fox.  Still no sighting of Sir Barton.

AND DOWN THE STRETCH HE COMES!!!!!  Secretariat is holding them at bay as he maintain his margin of victory!!!!  HE WILL BE THE TRIPLE CROWN CHAMP OF ALL TRIPLE CROWNS!!!!  AS HE CROSSES THE FINISH LINE, THE BATTLE FOR SECOND GOES TO:  American Pharoah, one length clear of Affirmed.  Way back in fourth is Citation, who finished in a dead heat with Count Fleet.  Closing out the real deal, are:  War Admiral, Seattle Slew, Sir Barton, Assault, Omaha, Whirlaway, and Gallant Fox.

And, there you have it.  I hope you may have enjoyed this fictitious account, which was based partly on fact, that being the their actual times, as provided by The Daily Racing Form.  Lastly, here is the chart:

~Written by Cause For Concern