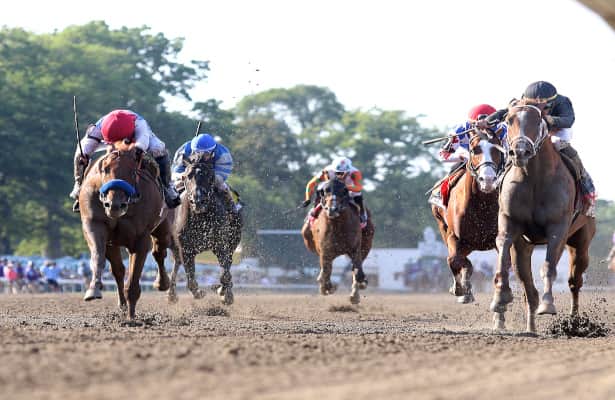 Ethereal Road, who scratched from this year's Kentucky Derby, was the only entrant from the Run for the Roses to race in the past two weeks.

Trained by D. Wayne Lukas, Ethereal Road made his second turf try in Saturday's Saranac (G3) at Saratoga. He chased at the rear of the compact four-horse field and weakened down the lane to finish last, 17 1/2 lengths adrift of wire-to-wire winner Annapolis.

Three Kentucky Derby runners are likely working toward the Pennsylvania Derby (G1). Taiba and Simplification are probable for Parx's signature race, while White Abarrio is possible.

Armagnac, after a fourth-place finish in the La Jolla (G3) on grass Aug. 7, returned to the dirt Saturday for the Shared Belief Stakes at Del Mar. He was sent off the second choice at 2-1, though did not get near his customary frontrunning position and weakened to finish fifth and last, 21 lengths behind long shot winner Go Joe Won.

Fenwick tried the undulating turf at Kentucky Downs for the first time in a first-level allowance Saturday. Given a 9.33-1 chance by the wagering public, he settled near the rear and stayed on in the lane to pass weakening foes. He crossed the wire seventh, six lengths behind winner Dominican Pioneer.

Two Belmont entrants, the 1-2 finishers in the West Virginia Derby (G3), recently worked out. Skippylongstocking, a winner at Mountaineer, drilled a bullet five furlongs at the Spa on Sunday. It was his third work back since that score. We the People breezed at WinStar Training Center on Saturday; it was also his third work back since the West Virginia Derby. There is no publicly identified goal for either horse yet.