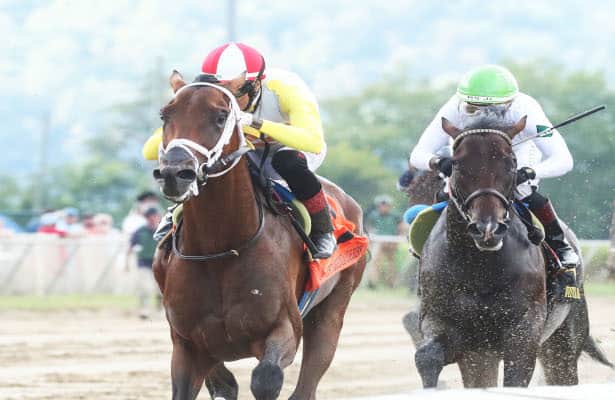 Two 2022 Kentucky Derby contenders, Classic Causeway and Ethereal Road, contested the Grade 1 Saratoga Derby on Saturday at the Spa. Classic Causeway continues to look like a serious player in the sophomore turf division; he led much of the way and stayed on to finish third, 1 3/4 lengths behind Nations Pride. Ethereal Road, well off the pace from the beginning, never kicked on and finished ninth in his first turf try.

Taiba returned to the work tab for the first time since finishing second in the Haskell on July 23. He breezed four furlongs in 48.0 seconds at Del Mar on Aug. 6.

Creative Minister, third in the Preakness, returned in the Curlin Stakes July 29 at the Spa. Settled mid-pack, he made up some ground into the upper stretch. But he could not sustain his run through the final furlong and crossed the wire third, 6 1/2 lengths behind Artorius.

Preakness winner Early Voting returned to the races July 30 in the Jim Dandy (G2) at Saratoga. He set the early pace, but he could not hold off the cavalry in the lane. He flattened to finish last of four, 3 3/4 lengths behind Preakness second-place finisher Epicenter.

Preakness horses shined in the West Virginia Derby (G3). Skippylongstocking stalked the pace set by We the People, led near mid-stretch and won by 1 1/2 lengths over that foe. Simplification crossed the wire a clear third, 6 1/4 lengths behind the winner, after tracking the leading pair.

Armagnac tried the turf for the first time Sunday at Del Mar in the La Jolla (G3). He showed his customary speed and set a pressured pace in the race. But Armagnac flattened out late to finish fourth, 7 1/4 lengths behind Cabo Spirit.

Fenwick, ninth in the Preakness, returned to action in an allowance race Friday at Ellis Park. The one-mile race originally was carded for grass, but was washed off to a sloppy dirt track. He set the early pace but flattened out to finish fourth behind Uninvited Guest.

Belmont Stakes fourth-place finisher We the People set the pace in the West Virginia Derby Saturday at Mountaineer. But he was unable to hold off the stretch charge of Skippylongstocking, who got the best of him once again. We the People chased on for second, 1 1/2 lengths beaten but 4 3/4 lengths clear of third-place Simplification.

Golden Glider entered the Curlin Stakes on July 29 for his first race since the Belmont. He tracked three wide and remained in range past the three-eighths, but he weakened in the lane and finished fifth beaten 10 3/4 lengths by Artorius.