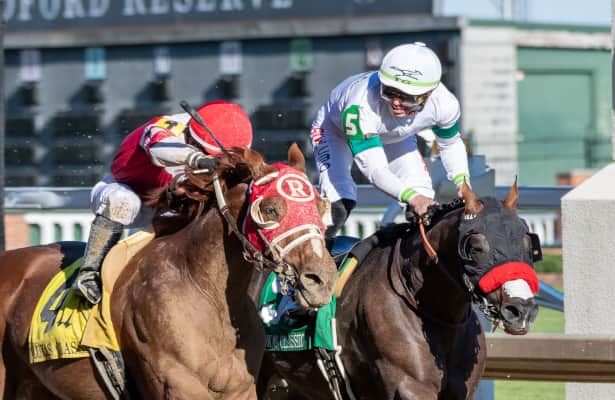 Kentucky Derby 2022 winner Rich Strike faced older company for the first time on Saturday at Churchill Downs in the Grade 2 Lukas Classic. He chased closer to the pace than usual, made a strong run in the lane and was narrowly outfinished by 4-year-old Hot Rod Charlie. Rich Strike crossed the wire only a neck behind, a promising outing against a well-proven older horse.

See which riders are best with the Jockey Report

A pair of Preakness 2022 runners recently placed in stakes races.

Creative Minister returned to the track on Sept. 24, returning to ungraded company after his third-place finish in the Smarty Jones (G3). He stretched back out to the Preakness distance of 1 3/16 miles and suggested that these longer races might be where he belongs. With the rear of the main group early, he made a rally in the lane and missed by only a nose to Home Brew.

Also on Sept. 24, Secret Oath got away from Nest in the Cotillion (G1) at Parx. She made an early bid to chase a distant second behind Society, who was winging it on the lead. She flattened out late to finish third, behind the pacesetter and local long shot Morning Matcha, who closed inside Secret Oath for the place.

On the same card as the Cotillion, Preakness alumni Simplification and Skippylongstocking contested the Pennsylvania Derby, finishing fourth and ninth, respectively; Belmont alumnus We the People also finished eighth.

Saturday, Fenwick made his third start since finishing ninth in the Preakness. In a first-level allowance going nine furlongs at Churchill, Fenwick chased mid-pack and flattened out down the lane. He crossed the wire eighth in the field of 11, 15 lengths behind up-and-coming sophomore Open Road.

Belmont 2022 second-place finisher Nest, who has since won both the Coaching Club American Oaks (G1) and the Alabama (G1) in triumphant fashion, is gearing up for her first start against older fillies and mares. She put in a final work at Belmont on Saturday, going four furlongs in 49.42 seconds. She is expected to enter Saturday's Beldame (G2) at Aqueduct.