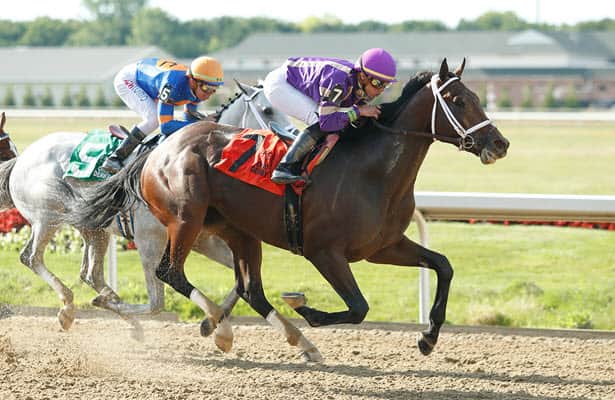 Tawny Port, White Abarrio, and Classic Causeway all made their first start since the Run for the Roses in the Grade 3, $500,000 Ohio Derby on June 25. Tawny Port, sent off as the 1.3-1 favorite in the field of eight, rallied to the lead in upper stretch and kept on to win by a length over White Abarrio. Classic Causeway, after an early pace battle, crossed the wire another 1 1/4 lengths back in third.

Tiz the Bomb returned to the work tab June 25 at Keeneland, where he breezed four furlongs on the dirt. Though it was his first workout since finishing ninth in the Kentucky Derby, he is expected to race July 9 in the Grade 1, $1 million Belmont Derby.

After finishing off the board in the first two legs of the 2022 Triple Crown, Happy Jack dropped to allowance company and cut back to a sprint June 19 at Churchill Downs. The changes worked: Despite the far-outside post in a field of 12, Happy Jack tracked the pace, made his run in the lane, and held to win by half a length.

Just over two weeks out from the 2022 Belmont Stakes, the field is still regrouping before their campaigns for the rest of the year. None of the Belmont contenders has yet returned to the work tab or the entry box. But Mo Donegal and Nest are expected this summer at Saratoga, and Skippylongstocking is aiming toward the West Virginia Derby (G3).