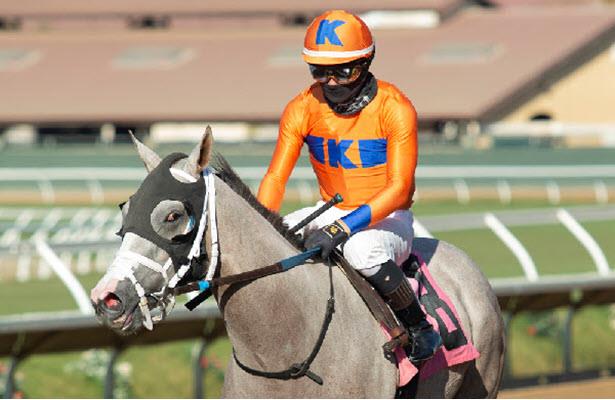 In what appears to be a wide-open edition of the Grade 2, $150,000 Sorrento Stakes at Del Mar, seven fillies will face starter Jay Slender Friday for a six-furlong tussle that will reward the one home first with a nice payday, a chunk of black type and a leg up toward the meet’s top prize for 2-year-old distaff runners -- the $250,000, Grade 1 Del Mar Debutante on Sunday, Sept. 6.

The three locals have the benefit of both experience and a feel for the Del Mar strip. In September Secret’s case that is especially so in that she won a $50,000 maiden-claiming race at the shore oval on July 24 and now is wheeled back just over two weeks later for her stakes debut. She’s a California-bred by Grazen and is trained by Peter Miller.

My Girl Red, by Texas Red, a horse Keith Desormeaux – My Girl Red’s conditioner – also trained, comes off a 4 1/2-length score at Santa Anita in a straight maiden race on June 14. Leading rider Flavien Prat chooses to stay with her for her stakes debut.

Exchange Vows won by three in a $50,000 maiden-claimer at Los Alamitos on July 2. She’s turned in three five-furlong works at Del Mar since.

The trio of out-of-towners are part-owned and trained by James Chapman. Trip to Seoul scored her first victory at Mountaineer Park in West Virginia; Scaterra broke through in her first attempt at Arlington Park outside Chicago, and Scat’s Choice was a winner at Belterra Park in Cincinnati.

First-timer Get On the Bus fetched $340,000 at the Ocala Breeders’ Sale in March after working an eighth of a mile in :10.1. She’s by the top stallion Uncle Mo and has had a series of steady works for trainer Doug O'Neill.

*Rating is based on HRN fan votes, which rank the Top Active Horses in training.
September Secret Sorrento Sorrento (2020)