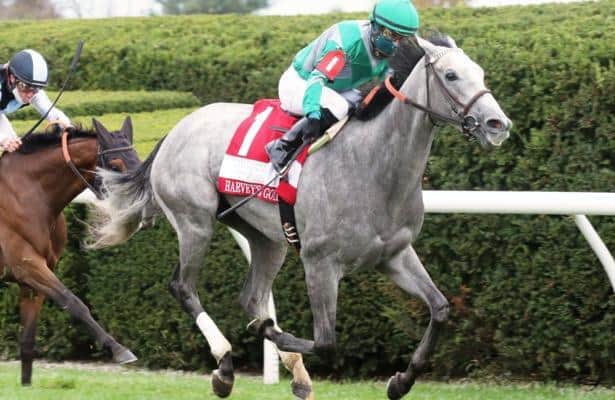 The 44th running of the Beaugay, a 1 1/16-mile inner turf test for older fillies and mares, will see Harvey’s Lil Goil, the third-place finisher of the Breeders’ Cup contest going 1 3/16 miles on the Keeneland turf in November, make her 4-year-old debut for Hall of Fame trainer Bill Mott.

Owned by the Estate of Harvey A. Clarke and Paul Braverman, the daughter of 2015 Triple Crown-winning Hall of Famer American Pharoah won a pair of graded stakes in her sophomore campaign, capturing the Grade 3 Regret in June at Churchill Downs going 1 1/8 miles in just her second career turf start.

Next-out, Mott returned her to the main track, where she had run her three previous starts [including a win the Busanda in February 2020 at Aqueduct Racetrack], and she ran third in the Grade 1 Alabama in August at Saratoga Race Course.

The versatile Harvey’s Lil Goil was then switched back to grass, where she found a comfort zone in running second in the Dueling Grounds Oaks in September at Kentucky Downs before besting next-out winner Micheline to win the Grade 1 Queen Elizabeth II Challenge Cup in October at Keeneland. That preceded her Breeders’ Cup effort, where she ran just a neck and a head behind the winner Audarya and runner-up Rushing Fall in a blanket finish, registering a career-best 102 Beyer Speed Figure.

Mott said her success on both surfaces keeps options open, though a strong Beaugay effort could facilitate a start in the Grade 2, $750,000 New York going 1 1/4 miles on the turf on June 4.

“She's been doing fine. We're happy with her,” Mott said. "Interestingly enough, we think she's one that can do both. First things first, if she runs well in the Beaugay we could come back in the New York."

Junior Alvarado, aboard for the Breeders’ Cup effort, will have the return call from the inside post.

Allen Stable’s Civil Union is also making her way back to the track after a successful 2020 that saw her win 4-of-6 starts, with all victories coming consecutively. Civil Union posted back-to-back graded scores, with a one-length win in the 1 3/8-mile Grade 2 Glens Falls in September at Saratoga and the 1 1/4-mile Grade 1 Flower Bowl in October at Belmont.

In nine career starts, Civil Union has never posted a Beyer Figure that was less than her previous start, commencing with a 78 for her first-out win in August 2018 and culminating with a personal-best 99 for a competitive fifth-place effort in Breeders’ Cup Filly and Mare Turf.

Civil Union, who had been training at Payson Park in Florida, shipped to Belmont and recorded two works. The 6-year-old War Front mare first worked four furlongs on the main track on April 18 and then posted a half-mile breeze in 47.88 seconds on the inner turf course on Sunday.

“She’s been doing real good and we’re excited to get her out there,” McGaughey said. “I think she likes Belmont. The distance, going a mile and a sixteenth, might not be the perfect spot, but we just need to get her going.”

Nay Lady Nay will be making her first start at Belmont since running third in the Flower Bowl in October. After running eighth in the Breeders’ Cup Filly and Mare Turf, the Irish-bred 5-year-old will look to record a fourth consecutive Beaugay victory for trainer Chad Brown, who won the 2018-20 editions with A Raving Beauty, Homerique and Rushing Fall. Brown has won this race four times in total, starting with Waterway Run in 2014.

“She certainly seems like she’s training well,” Brown said of her recent works at Belmont including a five-furlong breeze Sunday in 1:02.54 over the inner turf.

Hall of Famer Javier Castellano will be in the irons from post 3.

Peter Brant’s Lemista a dual group stakes-winner in her native Ireland will be making her North American debut after winning four of seven races for previous trainer G.M. Lyons. Brown has taken over the conditioning responsibilities for the 4-year-old Raven’s Pass filly, who spent the winter training at Payson Park before shipping to New York and working twice at Belmont in preparation for her first start since September.

“She wouldn’t mind some cut in the ground,” Brown said. “She shows some turn-of-foot during her training in the morning. We’re really just excited to get the season underway.”

Bass Stables’ Thankful will be trying a surface change after going 3-1-1 in eight main track starts in her career. Trained by newly named Hall of Famer Todd Pletcher, Thankful started her 4-year-old campaign strong with a win in the Ladies Handicap going 1 1/8 miles over the Aqueduct main track before finishing out of the money in the Heavenly Prize and the Top Flight Invitational.

Luis Saez will have the call in Thankful’s turf debut, departing from post 6.

Just In Time Racing’s Platinum Paynter, second last out in the one-mile Plenty of Grace over the Aqueduct turf on April 11, will make her first start at Belmont for trainer Juan Vazquez. Luis Rodriguez Castro will ride from post 4.

*Rating is based on HRN fan votes, which rank the Top Active Horses in training.
Harvey's Lil Goil Beaugay Beaugay (2021)