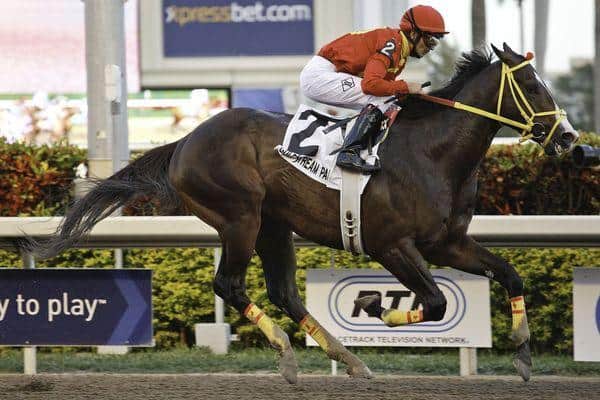 Trinniberg got loose on the lead and never looked back in Saturday’s 52nd running of the Grade 3, $250,000 Bay Shore at Aqueduct Racetrack, going on to a three-length victory over Hardened Wildcat to register his second straight graded stakes score.

Sent off as the 6-5 favorite in the field of eight 3-year-olds, the dark bay son of Teuflesberg rolled through an opening quarter-mile in 23.46 seconds and a half in 47.41, and was never seriously threatened as he swept under the wire in 1:23.46 for the seven furlongs.

“You should never be too confident going into a race,” said winning jockey Willie Martinez. “It’s horse racing, anything can happen, but I was overwhelmed with confidence. Once I cleared the chute, I knew it was all over. I was just trying to be the passenger. He’s the pilot.”

The victory was the third in seven starts for Trinniberg, who broke his maiden at Calder Race Course last June and won the Grade 3 Swale at Gulfstream Park on March 10 by six lengths. The colt also had a pair of second-place finishes last year in the Grade 2 Futurity at Belmont Park and Saratoga Race Course’s Grade 1 Three Chimneys Hopeful, which he almost upset at odds of 68-1.

Winning owner Shivananda Parbhoo said the May 19 Preakness was the most likely target for Trinniberg, but did not rule out the May 5 Kentucky Derby.

“There’s a 15 percent chance for the Kentucky Derby,” said Parbhoo. “I want to go long. I wanted to do that [in the Wood Memorial] but I don’t think he was ready.”

Hardened Wildcat, the second choice at 3-2, was 5 ½ lengths clear of How Do I Win. Completing the order of finish were Maan, King and Crusader, Phil Dancer, Perfect Trippi, and Copy My Swagger.