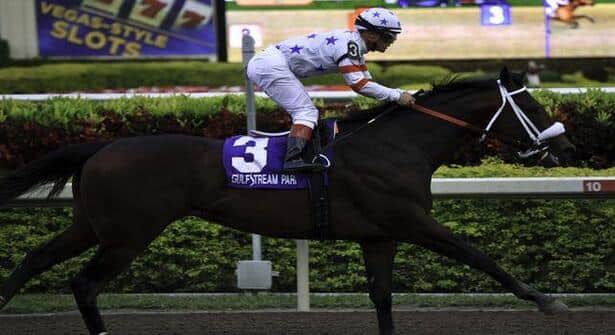 Stay Thirsty was pinned in along the rail for much of the race under Castellano. He came under a ride around the far turn and tried to make a race of it after finding clear sailing in the lane. He lugged in twice through the stretch while clearly second best.

Rick Dutrow, Jr., winning trainer of Trickmeister (No. 5): “That was a tough customer he faced today, and we couldn’t be happier. We love having him; he’s a cool horse. He ran big today. He had pressure on him the whole way, and Ramon said every time he asked him and needed him, the horse responded the right way. So, we’re very excited.”

“Naturally, our goal is the Whitney [Grade 1, August 4, Saratoga Race Course]. I’d like to get another one of these races into him, and then run him in the Whitney. He loves that track up there. I’m hoping he stays together the right way. And I’m hoping we get to run him in another race like this where he shows up again. And then we’ll be extremely excited.”

Ramon Dominguez, winning rider aboard Trickmeister (No. 5): “He was very sharp. He came away from there like a rocket and relaxed for me well. I felt like we were going right along pretty good and turning for home Stay Thirsty came to me. It seemed that [Trickmeister] always had a little extra – I was getting after him, but it seemed like he always had a little more in reserve. He galloped out very strong. I was very happy with him.”

Todd Pletcher, trainer of beaten favorite and runner-up Stay Thirsty (No. 2): “You figure in a race like this you wouldn’t have to set a track record in order to win, but [Trickmeister] ran an awfully good race and you have to give him credit for that. Coming off a six-month layoff and giving a horse like [Trickmeister] six pounds is a tall order.”

“Alan [Garcia aboard Joan’s Choice] was holding him in, so [Stay Thirsty] had no place to go. He got shuffled back, and we were giving the entire field six pounds and hadn’t run in six months. You wouldn’t expect to have to run 1:39 3/5 to win, but that’s what we would have had to do. For where we were and where we wanted to be, this is a good start. We’ll look at races like the Suburban [Grade 2, July 7, Belmont Park] and the Whitney [Grade 1, August 4, Saratoga Race Course].”

Javier Castellano, rider aboard beaten favorite and runner-up Stay Thirsty (No. 2): “I’m very happy with his return performance today. I’m not disappointed that he didn’t win. It didn’t work out for today, but in the long term this was a very good return race for him. He has gotten bigger and stronger from last year, and he is a very mature and intelligent horse.”