Trevor McCarthy looks at the bright side of his injury 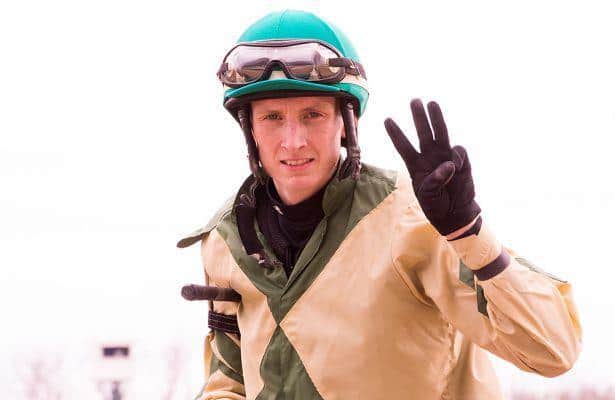 It would be understandable for Trevor McCarthy to be discouraged. His spill at Aqueduct on Friday came a year to the day after he returned from an 11-week absence following ankle surgery.

Get Paddock Prince picks for the full Aqueduct meet

But the 28-year-old jockey, who broke his collarbone and his pelvis, was nothing but upbeat during a telephone interview with Horse Racing Nation Tuesday.

“I get to enjoy my family and enjoy the holidays,” McCarthy said. “And you know, when holidays come, it's good food that I get to enjoy. I'm looking forward to it.”

The injury occurred in the sixth race when McCarthy, aboard Ever Summer, was forced out by Jalon Samuel aboard Rhombique. Ever Summer clipped heels with another runner and fell. She got up on her own power and walked off with outriders. Rhombique was disqualified from second to last, and Samuel was suspended for seven days.

We actually just got back from a specialist in New York City yesterday,” McCarthy’s agent Joe Migliore told HRN. “Happy to report that he got some really good news. He doesn't need surgery on either one of his injuries. … Both injuries are not displaced, which is really good news, and will heal on their own time. The general timetable that we're looking at right now is eight to 10 weeks, and then hopefully back competing at Aqueduct sometime in February.”

Migliore was a bit less sanguine than McCarthy about whether this is a good time of year to recover from an injury.

“Yes and no. Obviously, you have the winter break, the holiday break. And we all race as much in the wintertime three or four days a week as opposed to four or five days a week. But at the same time, you know, usually the winter – we had a great winter last year, were second in the standings at Aqueduct, and we were looking to kind of replicate that and maybe you can take a run at trying to be the leading rider. So those goals obviously have to change, but he'll be ready to go come February.”

In the meantime, McCarthy said, “I'm able to get around a little bit. I'm able to use one crutch. But for the most part, I am doing OK. My pain level was not terrible – I do have a lot of pain, but I’ve got a high pain tolerance. And I'm taking some medication for the pain. I think nighttime is a little rough. And my body's not used to handling these pain pills, so it upsets my stomach. But other than that, I guess I'm in good spirits. I'm in a good mood. I'm just taking my time and resting.”

And he was philosophical about the injury and the down time.

“God put me in this position, and it's just part of my life and I'm going to get through it, and I'm going to be OK,” he said. “And it might have been a blessing in disguise, … Riding races and being a jockey, you're away from your family so much. And you're constantly working in this business, whether you're a trainer or groom or a hot walker, it's a lifestyle, this business and it’s good to kind of get to step away from it for a few months and take a break from it.”

He insisted that he has no ill will toward Samuel.

“Everybody makes mistakes out there. And things happen. And it stinks to be on this end of the stick, but it happens and nobody intentionally goes out of the way to hurt somebody. So I definitely still have a lot of respect for everybody out there. I just hope nobody feels guilty or anything like that.”

McCarthy is Migliore’s first client, and they’ve been together about a year.

Migliore, 31, recently became the agent for an apprentice rider, Madison Olver, who began racing this month and has four starts at Aqueduct with no wins.

“She's shown a lot of ability and horses do really seem to run for her. She's just beginning her career, and we’ve got to get her some more experience. But I'm excited about helping her kind of learn and grow.”