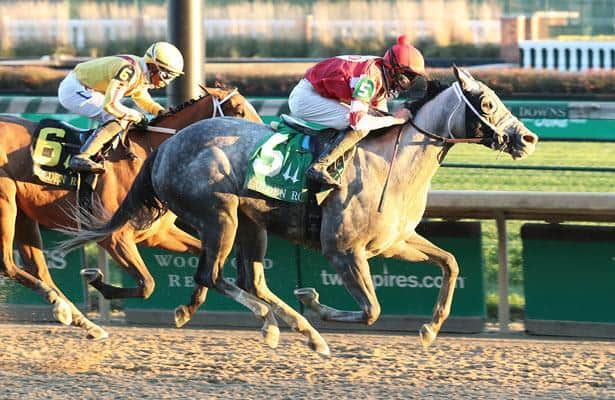 Despite getting bottled up for much of the race, Travel Column took a late opportunity to go wide and grab the lead in the final furlong, earning the the win at 9-2. Favored Simply Ravishing, who was exiting a fourth in the Breeders’ Cup Juvenile Fillies, checked in fourth again.

Travel Column entered off a third-place finish in the Alcibiades (G1) at Keeneland, which was won by Simply Ravishing.

“We’ve been pointing to this race for a while,” Cox said before the race. “Ever since the Alcibiades.”

Travel Column was pinched back at the start and left at the back of the pack, while Simply Ravishing settled in fourth fourth for the early going.

Eventually, Simply Ravishing took the lead around the far turn, but was unable to hold on for the stretch run, being overtaken first by Clairiere and Coach, then by Travel Column’s dramatic close on the outside under Florent Geroux.

“I wasn’t sure what was going to happen when she broke the way she did,” Cox said. “I think she’s getting a good education here as far as taking dirt and everything.”

Cox was encouraged by the performance of the daughter of Frosted out of Swingit, by Victory Gallop, and compared her to one of his other top female horses.

“She’ll come around,” Cox said of the poor start. “Very confident that she will. Monomoy Girl had some troubles out of the gate early on as well. I think that’ll just come with racing.”

The race was the sixth on the road to the 2021 Kentucky Oaks, awarding Travel Column 10 points for the win.

Travel Column returned $11.80 for the win. She is owned by OXO Equine, who purchased her for $850,000 at the Fasig-Tipton Saratoga Select Yearling sale in 2019.