Trainer claims 3 in 1 race at Churchill – but wanted 4 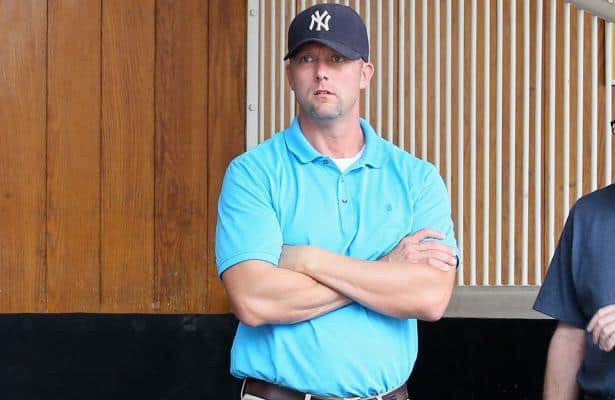 In what might be a first, trainer Jeff Hiles claimed three horses for $100,000 each after a Saturday race at Churchill Downs.

It happened in a 5 1/2-furlong race for 2-year-old maidens. Hiles and owner RSLP Racing claimed the winner, Just Call Ray, along with Versatile and Braggadocio, who finished sixth and 10th, respectively, in the 10-horse field.

"We originally wanted to claim four, but they won't let you," Hiles told Horse Racing Nation on Sunday. "The max you can claim is three, owner or trainer."

Hiles went out on his own in late 2018 after working as an assistant to Kenny McPeek.

He said the claimed horses "looked like good buys."

"They're 2-year olds, you don't know what they are. It's not like you're claiming a non-winner of two for 20. They're maiden 2-year-olds who – two of them were first-time starters, and they're going to change dramatically throughout the year. I mean, they're running five and a half furlongs. So that's another thing – two of them we know want to go long. The other one is going to be just fine going short."

The two that want to go long are Versatile and Braggadocio. Versatile is a son of Violence out of Sunny Cove. He was bred by Witham Thoroughbreds, which also is the former owner, and had been trained by Ian Wilkes.

Braggadocio is a France-bred son of Caravaggio out of Spindrift. He had been owned by Sunderland Racing LLC, D C Racing and Peter Rinato and trained by Norm Casse.

Just Call Ray's 1 3/4-length win Saturday came on his second try. The son of Mohaymen out of Rock Hard Cat also had been trained by Casse, and his former owner was Eric Long.

For their next races, "we're looking at Ellis Park," Hiles said. "We've already picked out races. The winner (Just Call Ray), he'll go in a non-two there at Ellis for 2-year olds and the other two, Versatile and Braggadocio, will go into maidens long on the grass."

"RSLP is Brooke Smith. He's a businessman here in Louisville, and he's had horses," Hiles said. "He had horses with Danny Hutton a while back, and then Bill Denzik's been his trainer. They're real good friends. And he's been doing things with him. Well, Bill is stepping out. He's not going to train horses anymore. And he's going to be Brooks' racing manager. And I'm training for him right now."

He said he and RSLP have claimed eight horses during the current Churchill Downs meet.

Hiles is happy with the progress he has made with his stable, which now has 15 horses.

"It's a business. It's a really hard struggle the first two years, or a year and a half anyway, and then things just started coming together, and I started getting better stock. I had to start putting the horses in where they can win versus trying to protect them from getting claimed. And it's been working out really well."

Look for more additions to his barn soon. "I've got yearlings that'll be 2-year-olds next year coming in. And then we plan on hitting all the sales this year and buying more there. I've jumped up quite a bit. But hell, when I was with Kenny, I had 36 horses on my own. So it's not really a new thing."

The 3-year-old daughter of Verrazano broke her maiden at Indiana Grand in May by 4 3/4 lengths and came back to score in an allowance race there by 2 3/4.

"We're looking at options for her. We've talked about the Indiana Oaks or the Iowa Oaks, or maybe a three-lifetime in Indiana. She hasn't been tested yet."