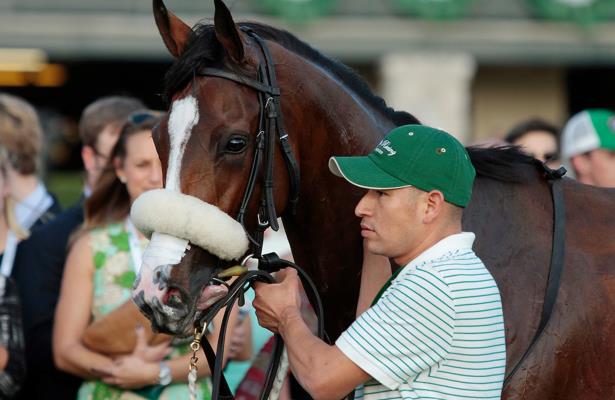 When trainer Jimmy Toner shows up at Keeneland, he usually has a strong hand. This week is no exception as he has Darby Dan Farm Racing’s Manitoulin for Thursday’s $100,000 Sycamore (G3) and the Phillips Racing Partnership and Pam Gartin’s Defiant Honor for Friday’s $150,000 Pin Oak Valley View (G3).

Both horses arrived at Keeneland Monday morning with Toner assistant Tiffany Webb minding the shop. Manitoulin has been here before with a win and a second in two starts. Defiant Honor is making her first Keeneland stop.

Manitoulin, a 4-year-old son of Awesome Again and champion Soaring Softly, comes into the Sycamore off a daylight allowance victory Sept. 20 at Belmont Park. He started 2017 with an allowance win here, and his lone off-the-board finish in five starts was a fourth-place showing in the Arlington Handicap (G3).

“He is improving,” Webb said. “As a 3-year-old, his focus was on other things and he was gelded over the winter. The family of Soaring Softly are late developers and they get better as they get older.”

Defiant Honor, a 3-year-old full sister to multiple stakes winner and three-time Grade 1 runner-up Recepta, finished second in the Jimmy Durante (G3) at Del Mar but has been off the board in two graded stakes tries this year.

“She had an excuse in the Lake George (G3),” Webb said of the sixth-place finish at Saratoga. The filly had minor throat surgery to correct a breathing issue. “Then she came back and won the Riskaverse at Saratoga impressively.”

In her most recent start, Defiant Honor finished eighth in the Sands Point (G2) run at 1 1/8 miles at Belmont on Sept. 16.

“We came back a little too quick in the Sands Point,” Webb said. “We were trying to get an invitation to the Queen Elizabeth (II Challenge Cup Presented by Lane’s End-G1 last Saturday at Keeneland).

“We gave her a little more time for this one. She is like her sister Recepta in that I think she is better at a mile and the mile and a sixteenth (of the Pin Oak Valley View) should be right in her wheelhouse.”