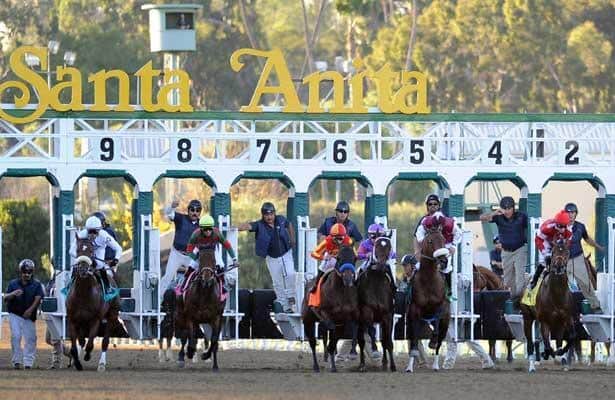 Trainer Ted H. West, 43, announced his retirement Friday following a lifetime on the racetrack.  A licensed trainer in his own right for the past 17 years, West started with his father, retired trainer Ted West, when he was a young boy.

“It wasn’t fun and I wasn’t enjoying my job anymore,” said West, who took over his father’s stable in April, 1999, and saddled the California-bred gelding Budroyale to a second-place finish in the $4 million Breeders’ Cup Classic. Budroyale earned more than $1.7 million.

West, who holds a degree in business from Cal-Poly Pomona, had 399 career victories, his last coming with Wife Approved at Santa Anita on May 20 this year under Tyler Baze.

“I just kind of got burned out with everything, and not getting any help from the government didn’t help matters,” said West, whose father is nearing his 80th birthday.

“I’m just going to take some time off until something else pops up. There’s no rush. I’ve been training since I was 26 and had worked with my dad every summer since I was a little kid.”

Ron McAnally, who saddled his first winner more than half a century ago, celebrates his 84th birthday on Monday, July 11, but took time to receive well wishers and share cake at Clockers’ Corner Friday sitting at his usual table with his chair facing the head of the stretch.

A Hall of Fame trainer of multiple champions headed by two-time Horse of the Year John Henry, McAnally said the secret to his success and longevity is “drink lots of wine and have as many girl friends as you can. Also, eat lots of Jewish food like lox and cream cheese.”

Seriously, it’s McAnally’s love of the game that keeps him going. He has outlived most of his owners, but still has 15 head cared for by a devoted staff headed by long-time assistant Dan Landers.

“I enjoy training horses and have been doing it all my life,” McAnally said. “I’m lucky my wife (Debbie) allows me to do it, and as long as I can, I’ll keep coming out.”

MIYADI HAS A HIT WITH ALEXANDER’S JUNIOR GILLIAM

Not that Steve Miyadi wasn’t happy to win Monday’s ninth race with a three-year-old son of Tribal Rule named after the late Brooklyn and Los Angeles Dodgers’ star Junior Gilliam, but he’d be happier if owner/breeder Nick Alexander sent him more heavy hitters.

Alexander, a long-time fixture in California Thoroughbred racing, names many of his runners after former baseball players. He also has horses with leading trainer Phil D’Amato.

“None of my (horses named for) players hit .300,” the 59-year-old Miyadi lamented half-heartedly Friday morning. “All of D’Amato’s are All-Stars. Hall of Famers go to D’Amato. But I know Gilliam was a great player in his own right and it’s an honor to train his namesake. I know it means a lot to Nick to see him run as well as he did the other day.”

(Gilliam was also an integral part of the first switch-hitting infield in World Series history, as he played third base on the Dodgers’ 1965 team that included shortstop Maury Wills, second baseman Jim Lefebvre, and first baseman Wes Parker).

Junior Gilliam, the horse, is named for the former Dodger second and third baseman who died just before his 50th birthday, on Oct. 8, 1978. On Monday, the horse was making his first start since last Oct. 31, dropping from a maiden allowance race at Golden Gate Fields to a $50,000 maiden claimer at Santa Anita, which Miyadi felt was about on par

“I’ve been with Nick for years,” Miyadi said. “I groomed his horses when I worked for (the late Mike) Mitchell until I left in 1987.

“I wasn’t surprised that Junior won. I got lucky when the (9-10) favorite (Worldwide) pulled up, let’s face it, and we got a dream trip. He sat by himself behind dueling leaders and got first run.”

Junior Gilliam, the horse, went off at odds of 19-1. Coincidentally, 19 was the number worn by Junior Gilliam, the player. Held in the highest esteem by one baseball’s most storied franchises, James William “Junior” Gilliam’s number was retired on Oct. 10, 1978, two days after his death, and just prior to the World Series, which was won by Billy Martin’s Yankees, four games to two.

Alexander, meanwhile has another homebred named after another Dodger great, Hall of Fame shortstop Peewee Reese, entered in Sunday’s seventh race for D’Amato.

Songbird is set to work Saturday under exercise rider Edgar Rodriguez for Saratoga’s July 24 Coaching Club American Oaks which will boost its purse from $300,000 to $500,000 to lure the champion three-year-old filly of 2015.

“She’ll ship either the night of July 19 or early morning of the 20th,” said Jerry Hollendorfer assistant Dan Ward. “She’ll be there on the 20th. She’s a good shipper; she’s good at everything. She doesn’t let anything distract her, that’s for sure.”

On Sunday, closing day of the Spring Meet, Hall of Fame jockeys Gary Stevens and Mike Smith will be available from 11:30 a.m. to 12:30 p.m. to sign one-of-a-kind posters featuring three-time champion mare Beholder and the undefeated filly Songbird.

Signings will take place in the shaded saddling enclosure. Families are invited to bring the kids, as Santa Anita mascots, Winnie and Lucky, will be on-hand to greet fans and offer Beholder peppermints, her favorite treat.

FINISH LINES: Trainer Doug O’Neill said Friday morning that Kentucky Derby winner Nyquist will work Monday at Santa Anita, “and probably by mid-week next week we have to make a decision (on where he’ll run next).” . . . The California Horse Racing Board will conduct its regular monthly meeting Thursday, July 14 at 9:30 a.m., while the Race Dates Committee will meet Wednesday, July 13, at 1 p.m. Both meetings will be at Del Mar’s Surfside Race Place. The public is encouraged to attend. An audio-only webcast of the meeting can be heard through a link on the CHRB website (webcast). The Board agenda and supporting package of materials as well as the committee agenda and package are available on the CHRB website . . . Jay Friedlander will be Tom Quigley’s guest Saturday, and West Coast reporter for The Blood-Horse Jeremy Balan will do honors Sunday, 12:20 p.m., in the East Paddock Gardens.

Analysis: Tiz the Bomb could be a major player in Belmont Derby
Tiz the Bomb leads the small group of former Kentu...
x