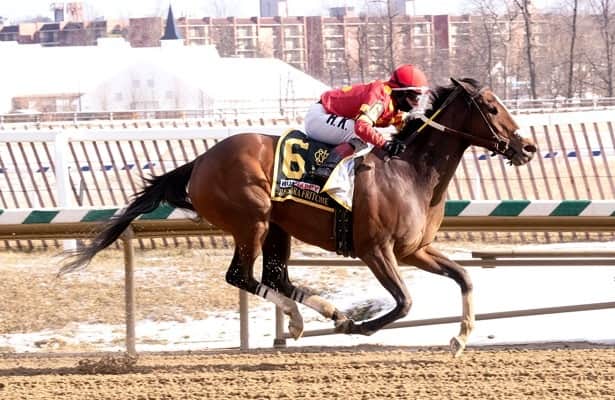 By early Sunday morning the voice mailbox on Justin Nixon’s cell phone was full, and for good reason. Late the previous afternoon, the Laurel Park-based trainer registered the first graded-stakes victory of his career in dramatic fashion with Hibiscus Punch in the Grade 3, $250,000 Barbara Fritchie.

Hibiscus Punch rallied to upset Hello Beautiful and Dontletsweetfoolya, both multiple stakes winners coming in on lengthy win streaks, at odds of 41-1. It was also the first graded triumph for the 6-year-old mare, and second in two months for owner-breeders Edward Seltzer and Beverly Anderson following Eres Tu in the Dec. 26 Allaire du Pont (G3), also at Laurel.

“I was cautiously optimistic. Obviously, Hello Beautiful is an awful nice mare, and Dontletsweetfoolya, and they were both coming into the race strong and with strong resumes. We would have just been happy with a graded placing for the filly,” Nixon said. “To win it was just over the top.”

It was just the eighth career start for Hibiscus Punch, by Into Mischief out of the Machiavellian mare Bellini Sunrise. In her only previous stakes attempt, she ran second by 2¼ lengths behind Dontletsweetfoolya in the Willa On the Move on the du Pont undercard. In between, she won an open Jan. 17 allowance at Laurel; all three came with Horacio Karamanos aboard.

“Closers were doing well. When we entered we knew that those two would probably set the race up pretty nice for us, if we were good enough,” Nixon said. “You look at their resumes and they’re both very talented fillies and very quick fillies. We thought if we could draft in behind them and get a piece, that’d be great.

“The trip worked out well. Horacio, he just rides her perfect. He lets her settle and make that one run and yesterday a lot of little things all came together for her,” he added. “Very happy for the Seltzers and just thrilled to have the filly. I’ve been at Laurel on and off since 2003 so that’s special, too, to win the big race here.”

Nixon said no decision has been made on the next step for Hibiscus Punch, who emerged from the Fritchie in good order. Nixon captured Sunday’s opener at Laurel with the Seltzer-owned Lucre ($11.80).

“Everybody’s good. We came out in good order and she’s doing well. She’s a nice filly,” Nixon said. “Right now we’re just go into enjoy the victory. Mr. Seltzer and I will talk and I’m sure he’s got some ideas. Whatever he thinks is best, that’s what we’ll do. Right now we haven’t looked at it too, too hard but we’ll flip through the stakes books and what have you and see where we go.”

Hello Beautiful, riding a three-stakes win streak, dueled with Dontletsweetfoolya up front for a half-mile before finishing fifth as the 2-5 favorite in the Fritchie. Starting this year, horses competing in graded-stakes in Maryland are not allowed to be treated with Lasix within 48 hours of post time.

“When she was empty at the quarter pole, I knew something went wrong. It’s OK. We learned something. She won’t ever walk over there without Lasix again,” trainer Brittany Russell said. “She’ll right, no worse for wear. We’re going to freshen her up for a couple weeks.”

Russell said Madaket Stables, Albert Frassetto, Mark Parkinson, K-Mac Stables and Magic City Stables’ Hello Beautiful will get some time off with Bruce Jackson at the Fair Hill Training Center in Elkton, Md. She had been a perfect 7-for-7 racing over Laurel’s main track.

Meanwhile, Russell said Michael Dubb and Bethlehem Stables’ Maythehorsebwithu was doing well out of his four-length score in the $100,000 Miracle Wood for 3-year-olds. It was the first stakes win for the gelded son of Grade 1 winner Bullsbay, a narrow second choice to multiple stakes winner Kenny Had a Notion.

“What a man. He showed up. He appeared to take that step that I said we were hoping to see eventually,” Russell said. “He's just a neat horse. He’s walking around the barn this morning like it wasn’t a hard effort for him or anything. That’s what you like to see.”

The $100,000 Private Terms, contested at about 1 1/16 miles, is the next step for sophomores on Laurel’s stakes program, scheduled for March 13. The one-mile Miracle Wood was the furthest test to date for Maythehorsebwithu.

“It’s going to be up to him. If he needs to skip the next one, I believe he’s probably worth it, if that’s what he’s telling us. But if he’s touting himself and acts like he needs to run again, I guess three weeks isn’t a big deal if the horse is doing well,” Russell said. “We’ll just let him tell us. If we have to skip it, it’s no big deal either.”

Five Hellions Farm’s Dontletsweetfoolya had won five consecutive races including back-to-back stakes entering the Fritchie, which marked her 4-year-old and graded-stakes debut. She wound up seventh, just the second time in nine career starts where she didn’t hit the board.

“As the day progressed, I would probably say our confidence wasn’t high with the way the track was playing,” trainer Lacey Gaudet said. “She was there, she got a little tired, she got headed. This racetrack was extremely tiring. I don’t think the lack of Lasix affected her. She runs with very little, so I don’t think that was an excuse for her. She came back fine. Unfortunately, horses get beat. You can’t win forever. Do I wish that he could have finished a little better? Absolutely. But, we’re happy that she came back happy and healthy and we’ll just go back to the drawing board and find another spot.”

Gaudet and Five Hellions also saw Fraudulent Charge rally to be second by a length to Street Lute in the $100,000 Wide Country for 3-year-old fillies. It was the sixth stakes win in eight starts for Street Lute and second straight over Fraudulent Charge, who came within a nose in the Dec. 26 Gin Talking at Laurel.

“She ran huge. We could not be disappointed in that. We want her to go further,” Gaudet said. “Everybody thought that it was a fluke last time, the way that she ran, because it was a four-horse field and had everything kind of go her way. I was just really happy to see her run back to that. She’s going to be a fun filly.”