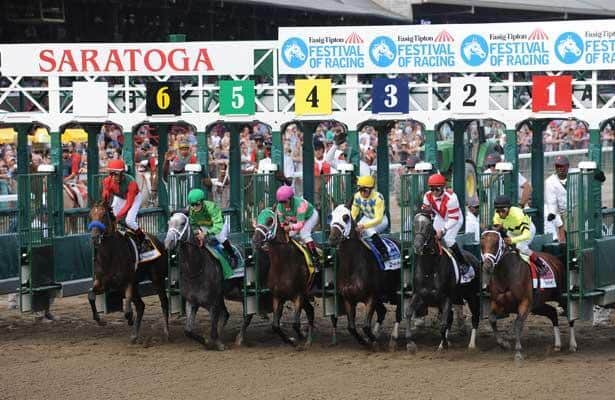 After a long, comprehensive training apprenticeship, Michael Dilger has stepped out on his own this year for the first time.

A graduate of the Darley Flying Start program and seven years working as an assistant to Todd Pletcher, Dilger, 35, opened his own stable in January. He will make his Saratoga Race Course debut Sunday a big one, running his first horse at the storied New York track in a stakes race when Wired Bryan takes on six others in the 99th running of the Grade 2, $200,000 Sanford for 2-year-olds.

Dilger, a native of Mullingar, Ireland, enters the six-furlong Sanford, won by past champions such as Secretariat, Affirmed, Forty Niner and Afleet Alex, with a promising gray son of Stormy Atlantic, who blitzed a field of New York-breds by 7 ¼ lengths in a five-furlong race June 19 at Belmont Park.

“Obviously, we were very pleased; he couldn’t have done it any better than he did,” Dilger said of Wired Bryan, an Anstu Stables homebred who is 5-1 on the morning line. “We never extended him in the morning. We knew he was good, but there was no reason to find out how good he was. We left a little bit for the race.”

Until striking out on his own, Dilger worked the past four years overseeing Pletcher’s string of runners at Delaware Park and also traveled to major races with his Triple Crown contenders.

He will face his former boss in the Sanford as Pletcher entered 2-1 morning-line favorite All in Blue along with filly Yes Liz, 6-1, in an uncoupled entry. Yes Liz also is entered in Friday’s Grade 3 Schuylerville.

“I’m just glad to be in a position where we’re able to,” Dilger said of facing Pletcher.

The Pletcher runners were debut maiden winners on back-to-back days, July 3 and 4, at Belmont Park. Yes Liz, purchased at auction by Stonestreet Stables for $200,000 in April, was a 3 ¾-length winner in her five-furlong debut July 3, and All in Blue, owned by Starlight Racing, won a five-furlong race at Belmont the following day by 6 ¼ lengths, earning a field-best 80 Beyer Speed Figure.

A son of Discreet Cat, Debt Ceiling won his first start on the lead on March 30 at Laurel Park and followed that up May 18 with a 2 ½-length score at Pimlico in which he raced far out in the center of the course and came from nine lengths back to win easily.

In his most recent start, Debt Ceiling, the 5-2 second choice in the Sanford, made a sweeping move into fast fractions to crush the field in the Grade 3 Bashford Manner on June 29 at Churchill Downs.

“His first start, I didn’t have him cranked up to win first out, and he did it on his own,” Robb said. “The Pimlico race was very impressive because he ducked out and stayed in the eight path the whole way. In the Bashford Manor, the move he made will make your jaw drop. He does everything nice; he acts like an old horse. He’s the real deal. Every time he’s won, he’s won pulling up so we’ve never got into him.”

Trainer Eddie Kenneally enters the Sanford with Jake’s Magic Hat, 8-1, a son of Tiz Wonderful who won his debut June 21 by 2 ¼ lengths at Belmont Park.

“He ran a professional race the first time we ran him,” the trainer said. “So, hopefully, he’ll move forward again and be more professional when he goes over there on Sunday. [It’s] a tough group of horses over a different track. The competition is solid; it’s a Grade 2, it’s a prestigious, historic race, and we’re happy with our horse and excited to run in it.”

Completing the field are Hollywood Talent, 6-1, for trainer Wesley Ward, who finished second in the Bashford Manor, and Southern Blessing, 15-1, a debut winner in May at Churchill Downs for trainer Steve Asmussen.