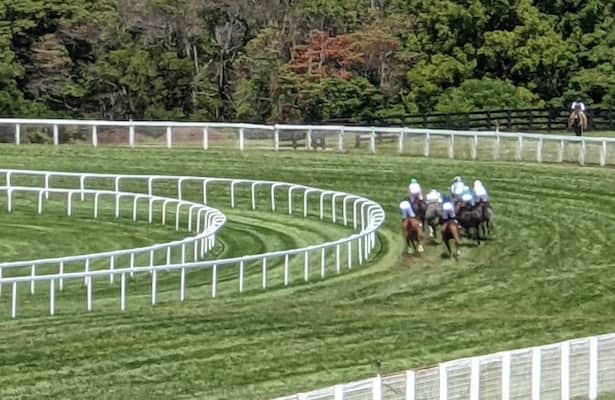 It has already been a good Kentucky Downs meet for trainer Kelsey Danner.

The 36-year-old from Louisville, whose family horse racing roots run deep, has been to the winner’s circle twice at the immensely popular seven-day meet.

Those were the first Kentucky Downs winners she has had since taking out her trainer’s license in 2017. Danner, though, is hardly a stranger to the game.

Her resume is strong. Danner has had stints working for Hall of Fame trainers D. Wayne Lukas and Carl Nafzger. Starting in 2011, she spent five years as an assistant to Wayne Catalano, who was the leading trainer at Kentucky Downs in 2013 with 10 wins.

She hopes for more and with bigger purses on Sunday.

Danner has a third runner entered in the Sunday finale when Psychedelic (8-1) goes in a $150,000 maiden event for 2-year-old fillies at a mile. She will be ridden by Joe Rocco Jr.

Danse Macabre last ran in the $150,000 Bolton Landing at Saratoga on Aug. 21 and she finished second, beaten 2 1/2 lengths by the Wesley Ward-trained Love Reigns.

“She ran good, but she had a troubled trip on the backside,” Danner said. “Wesley’s filly is a nice filly and I don’t know if we would have caught her. Hopefully, she can put it together on Sunday.”

Danner is wheeling Viburnum back because she won at the distance in her first start at Kentucky Downs, getting up to win by a head.

The daughter of Include has won three of 18 career starts and is on a two-race winning streak.

Danner will have one eye to the sky Sunday and hopes the day stays dry.

“If it rains a lot, we’ll be coming out,” she said, referring to both horses.

If the rain does indeed stay away and Danner gets the chance to play, she will hope to build on her earlier success at the meet.

She remembers the good times at this track when she worked for Catalano. When asked if her former boss has reached out to her after breaking her Kentucky Downs maiden, she laughed.

Some of last week's fastest stakes winners may surprise you
Repo Rocks , a 4-year-old gelded son of Tapiture,...

Gulfstream turf is ready: 17 grass races are scheduled this week
Amid well-publicized problems with the turf course...
x