'It was awful'; Trainer Duarte recovering from COVID-19 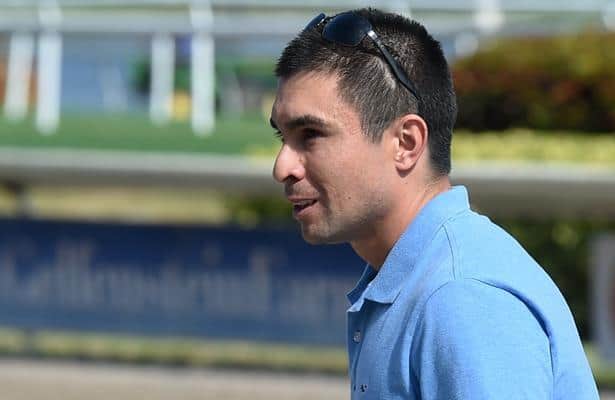 Trainer Jorge Duarte Jr. worked formerly as a jockey, a craft that comes with its share of physical strains. But "nothing was scary like this," Duarte said of his recent bout with COVID-19.

Duarte, 35, who trains for Colts Neck Stables in New Jersey, said it all started with "a little cough" around the weekend of March 14, when he was at Laurel Park. "I felt a little tired, nothing crazy."

Back home in New Jersey on the night of Tuesday the 17th, "I felt kind of hot. My head was hot, my body was hot."

By the morning of the 19th, "I felt awful." Recognizing that the symptoms could indicate COVID-19, Duarte decided to get tested.

"By Saturday, I knew I had a positive test," he said. "It looked ugly when I was first diagnosed."

Duarte went to Monmouth Medical Center on March 24. "That's kind of like the trend," he said. "Day 7, it attacks your lungs."

He also couldn't get his fever to drop below 101 degrees, and he stayed in the hospital for six days. He wasn't on a ventilator but had pneumonia -- which is "kind of taking a little bit to heal up" -- and was placed on oxygen.

"It was awful, awful," Duarte said. "I never in my life felt that awful."

Day 8 with the #COVID19 hasn’t been easy and not out of the woods yet keep praying I can get over this strong virus !#GodBlessYouAll pic.twitter.com/RGKN2la4WM

One fortunate break for Duarte, who lives alone, was that "for some odd reason," his mother came to visit him on the 17th, the day he got sick. They have been in isolation together, with Duarte staying in his bedroom except to go to the bathroom.

It helps to have her with him, he said, "because sometimes you don't want to drink anything, eat anything."

Now, Duarte said, he's "on the road to recovery" though still not at 100 percent. He's still short of breath and has a residual cough.

He is scheduled to get another test on Tuesday. Should that come back negative for COVID-19, he'll be able to see his regular doctor and get the all-clear to return to work soon.

He and Colts Neck Stables racing manager Alan Goldberg have set a target date of May 1 for his return. Duarte said Goldberg has been supportive, telling him to "heal up right."

Duarte has been a trainer since December 2018 after riding for Goldberg and then working as an assistant trainer under him. When Goldberg semi-retired from training and became racing manager, Duarte received his promotion.

In January 2019, in the Championship Meet at Gulfstream Park, Duarte emerged when he saddled four winners in eight starts.