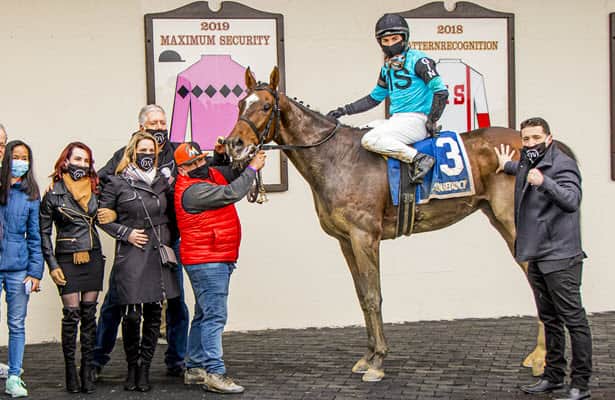 Trainer Danny Velazquez was injured in a Saturday morning accident at Parx Racing.

Velazquez, who trains a possible Kentucky Derby contender in Brooklyn Strong, was released from a hospital Sunday night. He told HRN that he suffered a lacerated liver in the fall. Also, he said, "my bicep, I've got to go to tomorrow to get it checked. I don't know what I did. It's all swollen, torn."

He said he also has a concussion and soft tissue damage on his chest.

Velazquez said he was leading another horse onto the track, when the accident happened. A riderless horse collided into his pony.

"We were going, jogging the wrong way (clockwise). I was on the pony. And basically, there was no sirens, there was nothing. I heard somebody say, 'look out,' and by the time I turned, the loose horse that was with no rider hit my horse from behind," Velazquez said. "And it was just horrible after that. We did like a front flip. And the pony went flying, the horse went flying, I went flying."

He said the pony and horse both had to be euthanized. "It was sad."

Brooklyn Strong has won 3 of 4 starts. His last race was a victory in the Remsen Stakes (G2), earning him 10 points on the Kentucky Derby leaderboard. Velazquez plans to race the Wicked Strong colt in the Wood Memorial (G2) on April 3, with 100-40-20-10 points on the line. Plans to enter the Gotham (G3) were derailed by a minor illness and lack of works because of bad weather at Parx.

Velazquez also trains Laobanonaprayer, a 3-year-old filly who gave him his first stakes win in the black-type Maid of the Mist at Belmont on Oct. 24. Brooklyn Strong followed that up with a score in the Sleepy Hollow in the next race. And his win in the Remsen gave Velazquez his first graded-stakes win.

According to Equibase statistics, Velazquez has saddled 184 winners from 1,097 lifetime starts and banked $4,974,539 since beginning his career in 2009.