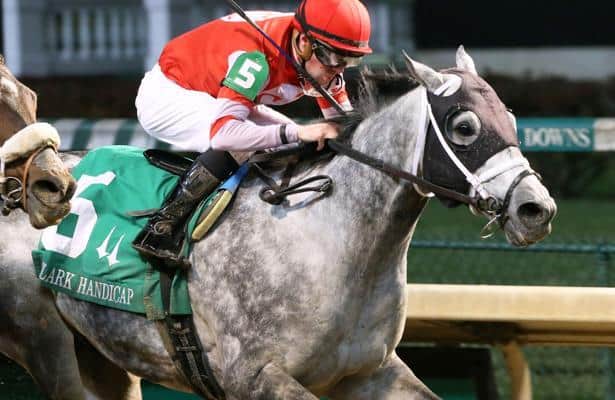 Brad Cox says he’ll remember Leofric for being “as tough a horse as I’ve ever been around.”

“If you pointed him to a brick wall and asked him to run through it, he’d knock it down,” the trainer Cox said.

Leofric showcased that toughness last time out in the Grade 1, $500,000, Clark Handicap at Churchill Downs. The 5-year-old son of Candy Ride faced a determined challenge from 3-year-old Bravazo and prevailed by a neck in the Nov. 23 race.

That victory under Florent Geroux in Louisville proved to be the last start of Leofric’s career. Cox and owner Steve Landers said Wednesday the 6-year-old has retired from racing.

“We still have rights to a couple of services with him,” Landers said. ...

“It was the wrong time of year to put him as a stud here in the U.S. So that’s why he went over. Some people in Chile asked about him and we sold him to them.”

Cox hoped to give Leofric a shot at Gulfstream Park’s Pegasus World Cup Invitational (G1) in January. A foot injury derailed that plan.

“It just took a lot of time,” Cox said. “Then he developed in the process a soft tissue injury. We just felt like he was not going to be able to come back at the graded stakes level. So he retired. He had accomplished enough. …

“He’s an unbelievable horse who’s been very good to us. It meant a lot for him to go out a Grade 1 winner.”