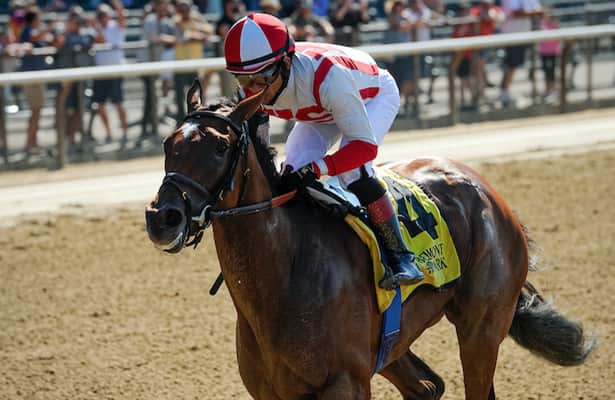 Along with this increase in average field size, the favorite win rate fell from the previous week’s 42.0 percent. Chalk was victorious 38.8 percent of the time over 816 total races run. The number of contested races rose from the prior week’s 752. The highest favorite win rate for the week was 59.0 percent at Presque Isle Downs. Favorites were most successful on the synthetic surface, even with much less success at Gulfstream Park. Overall, the public pick on the Tapeta won 47.8 percent of the time, with the lowest average field size for the week of 6.7 across the three surfaces. Turf racing remained the best place to beat chalk. Favorite strike rate on the grass was 34.1 percent. Long-shot winner Vindatude in the Belmont turf finale on Sunday triggered a Pick 6 carryover of more than $80,000 going into Thursday’s card. Bettors can start their handicapping early with Horse Racing Nation’s Pro Reports and subscribe to the Horse Racing Nation YouTube channel for upcoming content on the sequence.

Thursday will feature a mandatory payout of the Rainbow 6 at Gulfstream Park. Chalk has not been firing very frequently on the main track, winning at 23.0 percent. Rainy weather resulted in off-the-turf status last week. Synthetic favorites were also tough to trust, winning at 28.0 percent.