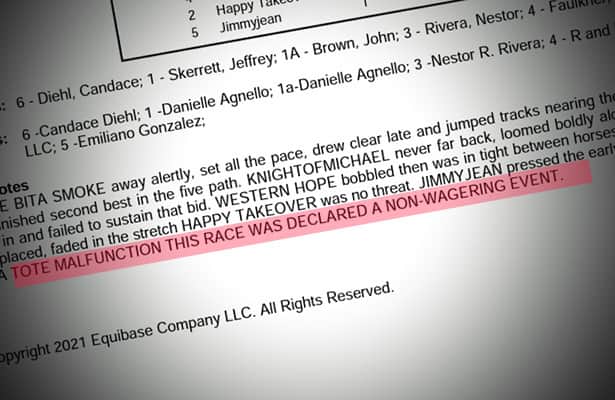 Tuesday’s sixth race at Thistledown was mired in controversy, as the race was declared a no-contest for wagering purposes due to what was listed on the chart as a tote error.

According to Patrick Ellsworth, director of racing at Thistledown, the issue occurred when betting for the race was not stopped until 52 seconds after the start.

“We just felt the best thing to do was refund the race, as much as it pains us to do,” Ellsworth said. “It was extremely unfortunate.”

According to Ellsworth, wires running to the tote system had become dislodged, causing communication to the main hub to be interrupted. When that happened, officials had to do a manual lockout override to stop betting.

Thistledown made it through the final two races on Tuesday’s card with no issues, and the problem was fixed.

“The cables that had been determined to be dislodged have been replaced, tested,” Ellsworth said. “We don’t anticipate this being a problem going forward, but extremely unfortunate.”

“We don’t get those reports for what can be days afterward,” Ellsworth said. “Without the ability to prove what came in after the horses broke from the gate, we can’t fairly pay it out the way we wanted to.”

Thistledown betting goes through United Tote Company, which is owned by Churchill Downs Inc. A spokesperson for CDI did not immediately respond to a request for comment.

Little Bita Smoke, 5-2 on the morning line, wired the field in the $31,500 maiden special weight race for owner and trainer Candace Diehl. Brilliantbenny and Knightofmichael, who were coupled the betting due, finished second and third respectively.

The coupled entry was the 2-1 morning line favorite.

Purses were paid out for the race.