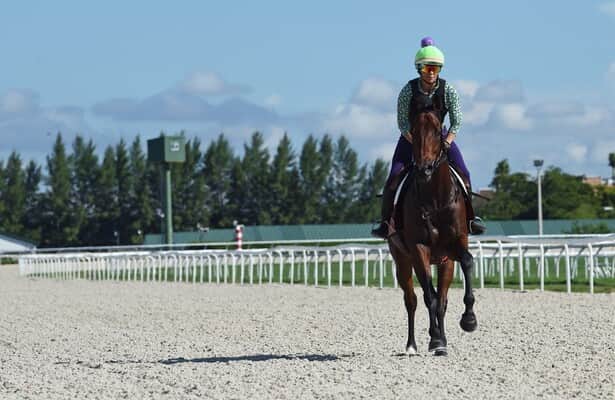 Ready or not, Gulfstream Park will start racing on its new Tapeta synthetic surface Thursday. If there was one prevailing impression coming out of morning gallops ahead of that debut, it was that the track is deep and testing.

Saffie Joseph Jr., whose 71 winners made him the spring-summer meet’s leading trainer, got a similar review from one of his morning riders who told him, “Don’t worry if it’s fast or slow. At Golden Gate it’s slow, too, but it plays fair.”

Just how slow it is remains a mystery yet to be quantified. On the way to having the world’s first track with three different racing surfaces – dirt, turf and synthetic – Gulfstream management OK’d morning gallops on the new surface. But there are no timed breezes – at least for now.

“I’m probably not going to work any horses on it, most likely,” Joseph told Horse Racing Nation on Tuesday. “It’s kind of like the turf. You don’t work on the turf, but you run on the turf.”

The lack of timed workouts might leave some horseplayers flying blind into Thursday’s card, which includes four Tapeta races. One man who specializes in betting Gulfstream told HRN that is not necessarily a bad thing.

“I’m very excited about it,” said Frank Mustari, a nine-time National Horseplayers Championship player whose son, Justin, won the tournament last month. “Anytime there’s a major change, people like myself who play that circuit daily probably have a little more of an edge.”

Mustari, who estimated that 80 percent of his betting dollars go to Gulfstream, said he is looking forward to the scheduling flexibility the Tapeta surface will provide.

“The field sizes will probably stay intact when they take races off the turf and go to the Tapeta,” he said. “I think it’s a great move by Gulfstream for what I do. I hope other players and gamblers feel the same. It could be a trend that might start saving horse racing, if this does work.”

Joseph echoed that sentiment, saying Gulfstream has become the first racecourse that no longer makes the main track a rainy-day ultimatum for turf specialists left with nowhere else to run.

“When it’s back to the rainy season, like you’ve got a lower-caliber, turf horse, and the race rains off, and you know he can’t run in the dirt, and you scratch him,” Joseph said. “Now you may consider running him on the Tapeta a couple of times to see if he handles it. And if he handles it, then you’re kind of golden, because you don't have to really worry. Sometimes you'll scratch some of these horses, and you wait almost six weeks, two months, before you get a race again.”

Mustari was happy to see there will be a wide variety of races on the Tapeta, ranging from maidens to stakes, sprints to middle distances.

“Originally I thought they were only going to card low-priced claimers,” he said. “If they continue to write all kinds of different types of races, that’s going to attract different trainers to come down there with their horses. You have the best of all three worlds now with synthetic, turf and dirt, so there should be no complaining from any horseman who needs somewhere to run their horses.”

Zayas got his first impression on the track Sunday morning, when he galloped Archer Road, a 7-year-old gelding who has not raced in 2 1/2 years.

“I was really looking forward to a breeze before we ride on it,” Zayas told HRN. “It’ll be weird, but it’s just a track, and it’s safe. They did a great job with it. We’re just going to have to see how the horses handle it down here.”

Mustari was not worried about stopwatches being checked at the door.

“I’m not a big workout type of guy at all,” he said. “I like to wager on things that I see in the afternoon. Until I see horses either prove to me that they like it or don’t like a surface, that’s what I go on.”

The rule of thumb for synthetic surfaces is that turf horses adapt to them more quickly than dirt runners. Because there has not been so much as a timed workout on the new course, Zayas stopped short of declaring that would be the case at Gulfstream.

Living in Des Plaines, Ill., a suburb of Chicago, Mustari had first-hand experience monitoring the ebb and flow of Polytrack racing before Arlington Park closed Saturday. Whether that insight carries any weight at Gulfstream remains to be seen.

“Like playing any surface, from day to day it could be different,” he said. “Doing your homework early on, you might find some trends or some things that you can capitalize on, because I’m pretty sure you might see some tendencies. If you follow it and find those tendencies, then you might be able to capitalize before the rest of the people jump on.”

As Joseph put it, “The best judge is once you start to run over it for two or three weeks, everyone will sort of get a good idea of what you need to do or don’t do.”

Gulfstream management originally planned to host its first Tapeta races last week. According to chief operating officer Aidan Butler, everything was pushed back because of a delay in the delivery of part of the new inner rail from Great Britain.