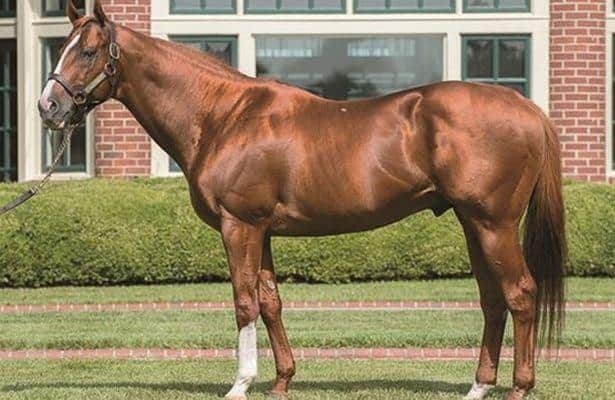 Lane’s End Farm announced today that prominent stallion City Zip has been euthanized at age 19 due to chronic foot problems.  A member of the Lane’s End Stallion roster since 2005, City Zip’s progeny have reached the highest echelon of Thoroughbred racing.  City Zip is a perennial leading sire and has emerged as one of the most successful sires of Breeders’ Cup winners.  He was a Top 10 active sire on the 2016 General Sire List for the third straight year, and in those years he was the sire of four Breeders’ Cup champions: Finest City, Catch a Glimpse (Canadian Horse of the Year and Champion 2-Year-Old Filly),  Dayatthespa (Eclipse Champion Grass Mare) and Work All Week (Eclipse Champion Sprinter).

Will Farish, owner of Lane’s End Farm said, “City Zip has had many significant achievements at stud and it has been a privilege to stand him at Lane’s End. We are very grateful to the members of his stallion syndicate and our breeders for supporting this special horse throughout his career. City Zip’s extraordinarily kind disposition and strong spirit endeared him to all, and he will be greatly missed.  We want to thank Dr. Scott Morrison of Rood and Riddle Equine Hospital for the diligent and compassionate care that he and his associates provided to City Zip.”

On the racetrack, City Zip was a grand racehorse who used his facile speed to win the historic Hopeful S. (G1) at Saratoga.  His stellar 2-Year-Old season also featured graded stakes victories in the Saratoga Special S. (G2), Sanford S. (G2) and Tremont S. (G3).  At 3, he notched wins in the Amsterdam S. (G2), Jersey Shore Breeders’ Cup (G3) and two others stakes races.  His career record was a very impressive 23 starts, 9 wins, 5 seconds and 4 thirds for earnings of $818,225.  City Zip was a half-brother to Horse of the Year and champion older male Ghostzapper.

City Zip’s record as a sire is highlighted by worldwide progeny earnings of over $78 Million, 71 stakes winners and 26 graded stakes winners.  City Zip will be buried in the stallion cemetery at Lane’s End Farm.