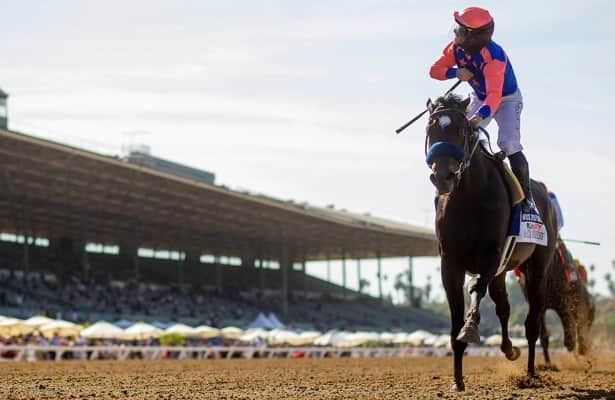 With the Santa Anita Derby (G1), Blue Grass (G2) and Wood Memorial (G2) on tap, last Saturday had the potential to be the most influential weekend of the 2021 Kentucky Derby prep season.

It did not disappoint as all three races delivered exciting results for vastly different reasons.

Fans of chaos and long shots were thrilled when Bourbonic stormed home to stun the Wood Memorial field at odds of 72-1.

Those who enjoy thrilling finishes and star power were pleased to see Essential Quality outlast Highly Motivated in the Blue Grass.

Bettors looking for a breakout contender in the final round of Derby preps had to be impressed with Rock Your World's stylish front-running score in the Santa Anita Derby.

Essential Quality, Rock Your World and Highly Motivated all will take significant money on the first Saturday in May after their performances.

Bourbonic will be slightly less than 72- 1 on Derby Saturday, but not much.

We take a closer look at the strongest performances from last week and rank the top five below.

1. Rock Your World (1st, Santa Anita Derby): It is hard to imagine anyone stealing the spotlight from Essential Quality on a day when the champion colt extended his perfect record to 5-for-5, but that is exactly what Rock Your World did. The John Sadler trainee showed immense ability on the turf and always had worked like he would thrive over dirt. Proving it on the track is a whole other story, and he did just that while showing strong speed early and late. He clearly can handle dirt and any added distance. Doubters can point only to the fact that he has never had to deal with dirt kicked in his face. It will be important for this colt to secure a good post and break in the Derby. He seems like a boom-or-bust candidate, but his upside is through the roof.

2. Essential Quality (1st, Blue Grass): All the champ does is win. It was not pretty, but he wore down a quality horse in Highly Motivated to maintain his perfect record. The model of consistency will put forth a honest effort at Churchill Downs for Brad Cox. His Beyer Speed Figures have been inching up ever so gradually, but he might finally run into a horse who is progressing at a faster rate at some point.

3. Highly Motivated (2nd, Blue Grass) Many ranked Highly Motivated in the same class as Essential Quality after his impressive win in the Nyquist Stakes on the Breeders' Cup undercard. He disappointed while running a troubled third in the Gotham (G3), but trainer Chad Brown had him much tighter for the Blue Grass. He has the talent to win the Derby, and he will be a much better value than Essential Quality if he can handle the added distance – which is a big question mark.

4. Medina Spirit (2nd, Santa Anita Derby) This honest, hard-trying colt is plenty talented, but he is a step below the very best of the division. He has received strong figures for running second to Life Is Good and Rock Your World but was never a serious threat to win any of those races. In his defense, it is possible that Life Is Good and Rock Your World are the two best 3-year-olds on the planet. There are derbies out there with his name on them in the future, but they are more likely to be of the Ohio, Oklahoma or West Virginia variety than the Kentucky Derby.