Kentucky Derby: How you rank the top 25 contenders 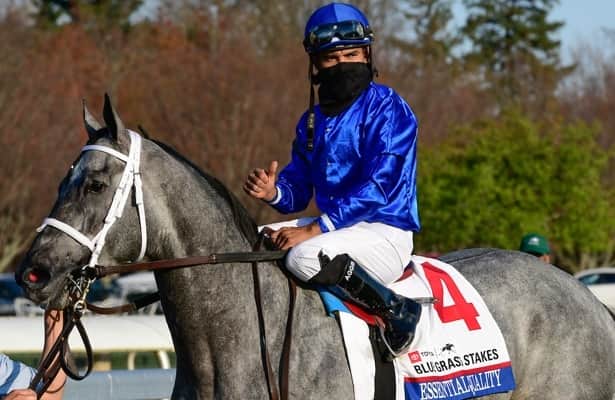 There have been more moving pieces on the 2021 Road to the Kentucky Derby than in a game of chess, but one consistent had remained throughout. Even with Life Is Good's dominance prior to getting injured, Essential Quality maintained his stranglehold on the No. 1 spot in HRN's top 3-year-old rankings since winning the Breeders' Cup Juvenile back in November – but that no longer is the case.

Despite winning his fifth consecutive race in Saturday's Blue Grass (G2), the undefeated Essential Quality was supplanted by Bob Baffert's "other" top 3-year-old, Concert Tour, in this week's rankings.

The son of Street Sense is not a typical second-string prospect. He has not been quite as brilliant as Life Is Good, but he seems better equipped to handle the Derby distance than his stablemate and was visually impressive in his own right while capturing the Rebel (G2).

If he wins the Arkansas Derby (G1) easily, there is a strong chance that he will pass Essential Quality on the tote board and will be the favorite for the Kentucky Derby.

Opinions were mixed on Essential Quality's desperate victory in the Blue Grass, but most were impressed with Rock Your World's authoritative win in the Santa Anita Derby (G1).

John Sadler's undefeated star colt passed his first dirt test with flying colors, earning a 100 Beyer Speed Figure for his front-running score. He lept to the No. 3 spot in HRN's Rankings.

Medina Spirit, No. 6, and Highly Motivated, No. 9, both moved up in the ranks after their runner-up finishes in the Santa Anita Derby and Blue Grass, respectively.

Bourbonic could not win an allowance race at Parx but managed to spring the upset at over 70-1 against a woefully bad Wood Memorial (G2) field on Saturday. The Todd Pletcher trainee rose to No. 15 after his victory.

With the biggest weekend of Derby preps complete, the Arkansas Derby and Lexington (G3) will offer 3-year-olds their final chance to make an impression before the Kentucky Derby.

Michael Stidham's Proxy, who has run competitively without winning in all three of Fair Grounds' Derby preps, will be given an opportunity to break through in the Lexington at Keeneland.

It will be interesting to see whether different tactics are used aboard Caddo River in a short Arkansas Derby field after Concert Tour was allowed to seize control early in the Rebel.

If the latest rankings are any indication, many expect to see a breakout performance from Concert Tour on his way to Kentucky.

The contender rankings are generated by user and staff ratings for top Kentucky Derby prospects. If the list is missing a horse you are watching, you may add that horse, rate it and watch it climb the ladder. Click here for more on HRN’s Power Rankings and voting.

Below is a screen shot of the top 25 runners. Click here to see the complete rankings list of active 3-year-olds. 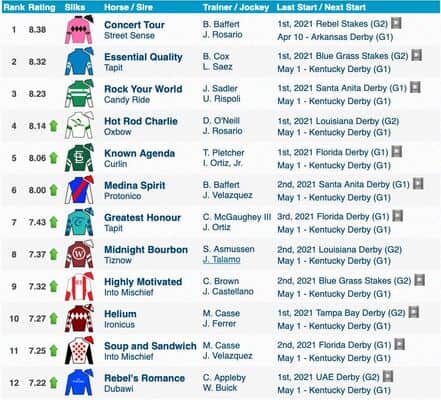 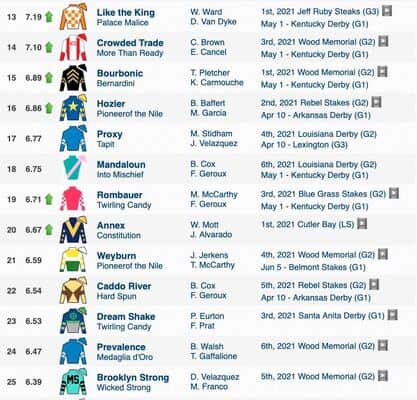