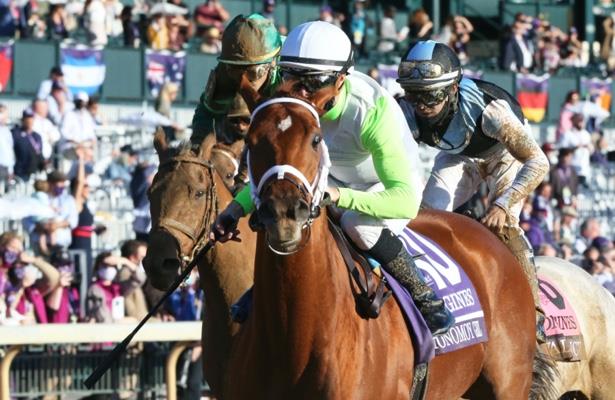 With a plethora of retirements after the Breeders' Cup, it is time to look forward to racing's biggest stars for 2021.

The female division was not hit nearly as hard as the male division in terms of retirements. Monomoy Girl, Swiss Skydiver, Gamine and Shedaresthedevil all remain in training, and each has tremendous star power.

It is scary to consider that each of those star fillies and mares could improve this upcoming year. It would be no surprise to see Monomoy Girl, who is being considered for the Cigar Mile, and Swiss Skydiver, who won the 2020 Preakness, challenge the boys at different points in the year.

In the male division, the highly accomplished Authentic, Improbable, Maximum Security and Vekoma are off to stud, leaving a wave of promising 3-year-olds, turning 4, with tantalizing upside.

Happy Saver, Charlatan, Maxfield and Nashville have crossed the finish line first in all 13 of their combined lifetime races.

The speedy Nashville will look to challenge Breeders' Cup Sprint winner Whitmore and runner-up C Z Rocket for control of the Sprint division.

Happy Saver, Charlatan and Maxfield looked poised to overtake the male handicap division, which also will include Tiz the Law, Code of Honor and Tacitus.

Here a closer look at who is rising and who is falling ahead of the new year.

Monomoy Girl (No. 1) — Her second career Distaff win combined with the retirement of many of America's top male runners has left Monomoy Girl as the deserving No. 1 horse in training.

Knicks Go (No. 5) — He parlayed a pair of allowance wins into a smashing performance in the Breeders' Cup Dirt Mile. Brad Cox has this runner going better than everm and he will be a handful next year.

Whitmore (No. 15) — It is impossible not to root for this gelding, who will be 8 years old in 2021. He showed in the Breeders' Cup Sprint that there is plenty of gas left in his tank.

Mucho Gusto (No. 19) — The Pegasus World Cup winner had fallen off the map after his fourth-place finish in Saudi Arabia. He resumed training recently and could become Bob Baffert's new leading older horse if he can build on the strong form he showed early in 2020.

Digital Age — He looked poised to be Chad Brown's next turf star after his win in the Turf Classic (G1) but took a step back when 11th in the Breeders' Cup Mile. He likely will be pointed toward longer races next year.

Frank's Rockette — She had an opportunity to join the top 20 as she had never been worse than second in 10 career starts heading into the Breeders' Cup Sprint, but she finished 11th in the Grade 1 affair. In fairness, it is never easy for a 3-year-old filly to take on older males, so she can not be written off because of that effort.

Who could be next to join the Top 20:

Maxfield — Brenden Walsh has had to stop on this horse multiple times because of injuries, but he has immense talent. A winner of all three of his starts, including the Matt Winn (G3) in May, Maxfield can reach an elite level in 2021 if he is able to stay healthy.

Charlatan — Most considered this Bob Baffert colt the Kentucky Derby favorite following his dominant win in the Arkansas Derby, but he has not been seen since. He dominated in three starts this year and truly could be any kind. A possible showdown looms with Nashville in the Malibu Stakes (G1) at Santa Anita Park on Dec. 26.

Nashville  — Though he has yet to win a graded stakes, some consider Nashville to be the most talented sprinter in the country. He has won his first three starts by more than 24 lengths and has been geared down each time. He broke the Keeneland track record for six furlongs in the Perryville Stakes while running a faster time than Whitmore did in the Breeders' Cup Sprint later on the card. It is unclear whether Steve Asmussen would ever consider stretching him out, but he certainly is a devastating sprinter.

The contender rankings are generated by user and staff ratings for top active horses. If the list is missing a horse you are watching, you may add that horse, rate it and watch it climb the ladder. Click here for more on HRN’s Power Rankings and voting.

Below is a screen shot of the top 10 contenders. Click here to see the complete rankings list of top horses still in training for 2021.