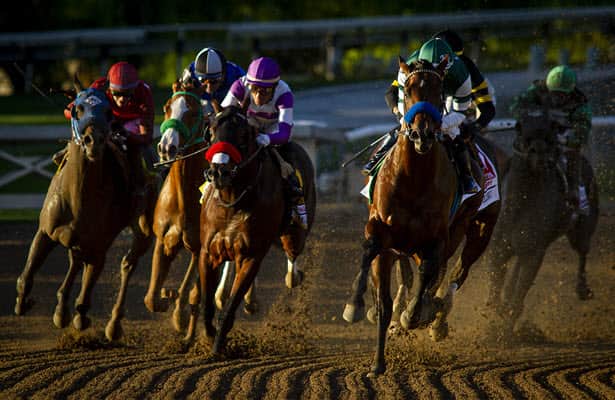 Unless the late Medina Spirit is ultimately disqualified from the 2021 Kentucky Derby for his failed drug test, this will be the first time since Justify’s sweep of the 2018 Triple Crown that not a single classic winner will return as a 4-year-old.

Medina Spirit was expected to be back this year but died suddenly on the track at Santa Anita on Dec. 6 from an apparent cardiac event after a workout. He remains the 2021 Derby winner pending final adjudication of his failed drug test by the Kentucky Horse Racing Commission.

In the last decade, the three other times there were no returning classic winners came after American Pharoah's Triple Crown run in 2015 and in 2013 and 2017.

If Medina Spirit is ultimately disqualified, runner-up Mandaloun – who is returning as a 4-year-old for trainer Brad Cox – will be awarded the win.

Of the last 10 Kentucky Derby winners, only two have raced at 4: Always Dreaming, who was winless in two starts in 2018; and California Chrome, who would go on to be Horse of the Year as a 5-year-old in 2016.

Last year’s two other classic winners, Rombauer (Preakness) and Essential Quality (Belmont), have been retired. Essential Quality is set to stand this breeding season at Darley in central Kentucky for a $75,000 fee, while future plans for Rombauer are still pending. As the 2022 racing season gears up, below is a closer look at 15 of the top older male horses who are set to return. Note that Knicks Go, the slam-dunk Horse of the Year for 2021, is not listed. The Breeders’ Cup Classic winner is scheduled to make his only start of the year in the Jan. 29 Pegasus World Cup (G1) at Gulfstream Park before heading to stud duty. 1. Flightine. Although he is expected to have an abbreviated campaign in 2022, visions of what may lie ahead for this brilliant colt put a gleam in the eye of even the most hard-bitten of racetrackers. Winner of all three starts by a combined 37 1/2 lengths, including an 11 1/2-length demolition in last month’s Malibu (G1), Flightline’s first major goal of 2022 is the Metropolitan Handicap (G1) in June. The Breeders' Cup Classic is the ultimate prize, trainer John Sadler has made clear. 2. Life Is Good. He was injured early last year while on the Kentucky Derby trail. After a 6 1/2-month break, he returned to win the Kelso (G2) at Belmont Park and then added the Breeders’ Cup Dirt Mile to cap off the campaign. The Into Mischief colt is on track for an intriguing matchup with Knicks Go in the Pegasus later this month. 3. Mystic Guide. Last year’s Dubai World Cup winner, unraced since July when finishing second in the Suburban (G2), is working at Fair Grounds and could make a start later this month for trainer Michael Stidham. The 5-year-old son of Ghostzapper is likely to have one start in the U.S. before setting off to Dubai to defend his World Cup title on March 26. 4. Hot Rod Charlie. The popular colt trained by Doug O’Neill is headed to Dubai in mid-January, where he is scheduled to have one prep before contesting the Dubai World Cup. Last year, the son of Oxbow won the Pennsylvania (G1) and Louisiana (G2) Derbys, was third in the Kentucky Derby, second in the Belmont Stakes and fourth in the Breeders’ Cup Classic. He also crossed the wire first in the Haskell (G1) but was disqualified for interference in the stretch. 5. Mandaloun. After his runner-up in the Kentucky Derby, the Into Mischief colt won the Pegasus Stakes at Monmouth Park and then added the Haskell (G1) via the disqualification of Hot Rod Charlie. He has been working steadily since late November and is penciled in to return in the Jan. 22 Louisiana Stakes at Fair Grounds. Mandaloun’s major early season goal is the Saudi Cup (G1) on Feb. 26. 6. Americanrevolution. The New York-bred will be back this year after a lucrative sophomore campaign for trainer Todd Pletcher. In 2020, the son of Constitution was a three-time stakes winner against New York-breds before capping the season with a victory in last month’s Cigar Mile (G1). He could be poised for even bigger things as a 4-year-old.

7. Jackie’s Warrior. The star sprinter won 4-of-7 starts last year, including a pair of Grade 1s against fellow sophomores. He capped off the season with a disappointing sixth-place finish as the heavy favorite in the Breeders’ Cup Sprint. It was subsequently revealed the son of Maclean’s Music had a chip in his left knee that required surgery. He is still recovering. 8. Aloha West. After winning his debut in February and rising through the allowance ranks last year as a 4-year-old, he closed out the year with a close second in the Phoenix Stakes (G2) at Keeneland followed by an 11-1 upset in the Breeders’ Cup Sprint. The son of Hard Spun seems to have more ahead. He is currently on winter break for trainer Wayne Catalano. 9. Art Collector.  He ripped off three straight stakes wins, including the Woodward (G1) and Charles Town Classic (G2), prior to checking in sixth in the Breeders’ Cup Classic. The 5-year-old son of Bernardini returned to work last Saturday for trainer Bill Mott and is targeting the Saudi Cup. 10. Golden Pal. The Uncle Mo colt turned in one of the best performances of Breeders’ Cup weekend with a powerful front-running victory in the Turf Sprint for trainer Wesley Ward. The effort earned a 107 Beyer Speed Figure, which was the highest of the year on grass in the U.S. Golden Pal, an experienced international traveler, is likely to do more globetrotting this year before returning for a Breeders’ Cup defense. Ward has indicated the King’s Stand (G1) at Royal Ascot was a summer target and a trip to Australia also could be on the schedule. 11. Following Sea. The Runhappy colt crashed the scene in the second half of his 3-year-old campaign for Pletcher with four Grade 1 placings (Haskell, Allen Jerkens, Breeders’ Cup Sprint, Cigar Mile) and a win in the Vosburgh (G2). Expected on the dance card in 2022 are races such as the Carter Handicap (G1) this spring and the Met Mile later in the year. 12. Midnight Bourbon. Runner-up in the Preakness, Travers and Pennsylvania Derby, he capped off the campaign with a third in the Nov. 26 Clark Stakes (G1) for trainer Steve Asmussen. He has been in steady training since the Clark and is targeting the Louisiana Stakes at Fair Grounds prior to a trip to the Middle East for the Saudi Cup. The son of the later-maturing Tiznow seems capable of doing more as a 4-year-old. 13. Dr. Schivel. He is in the mix for champion male sprinter based on his stellar sophomore campaign, which included a pair of graded-stakes wins against older (Bing Crosby (G1), Santa Anita Sprint Championship (G2)) and a tough-luck second by a nose in the Breeders’ Cup Sprint. Most recently, he was a no-show when seventh in the Malibu. Following that effort, trainer Mark Glatt revealed the son of Violence appeared to have come down with a virus that likely led to the dull effort. He figures to contend for another title in '22. 14. Speaker’s Corner. The lightly raced son of Street Sense won two of four starts last year for Bill Mott and most recently was second in the Nov. 27 Discovery Stakes. He returned to the work tab three weeks ago to begin preparations for his 4-year-old bow. 15. Domestic Spending. The top returning turf horse earned a pair of Grade 1 wins last year (Turf Classic, Manhattan) and was second as the favorite in the Mr. D. (G1) when last seen this summer. The Kingman gelding was a scratch from the Breeders’ Cup Turf and is in the midst of a winter break for trainer Chad Brown.