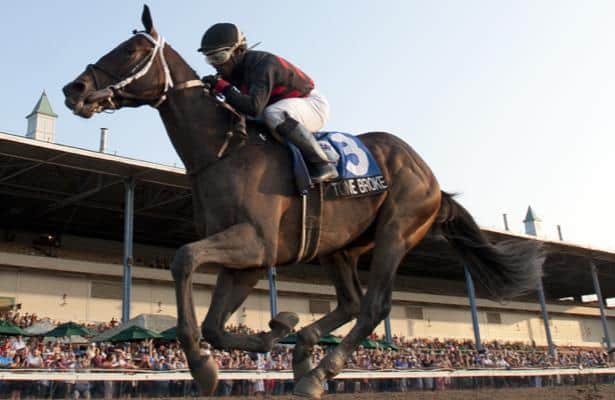 Trainer Steve Asmussen notes that Tone Broke has "thrown in a few clunkers along the way," but that the 3-year-old colt has had to do so in three countries and over multiple surfaces.

“But he is a very talented horse and we felt this was a nice opportunity to close out the year with another stakes win," Asmussen said, with Tone Broke, who took two-thirds of this year's Canadian Triple Crown, entered for the $250,000 Zia Park Derby run Nov. 27.

A Broken Vow colt, the Ontario-bred Tone Broke won the Prince of Wales Stakes in July over the Fort Erie dirt, then switched to turf to capture Woodbine's Breeders’ Stakes in August. Going back to the first leg of Canada's Triple Crown series, he ran third in the Queen's Plate, too.

“For the Queen’s Plate, we probably just were a race short there,” said Michael Levinson, Racing Manager for owner L and N Racing LLC. “He was really sharp the next out at Fort Erie.”
Overall, Tone Broke has won four times in a dozen career starts while earning $528,600 to date.

The colt will be coming into the race fresh having last appeared when finishing ninth in Belmont Park's Jockey Club Derby Invitational, the third leg of the "Turf Trinity" series for 3-year-olds in New York, back on Sept. 7.

“He had a really, really good work about two weeks ago,” Levinson said . “You can see he worked a bullet in like :59 or something. He’s on track.”

That Nov. 10 breeze measured five furlongs in 59.52 seconds at Remington Park. Tone Broke's final 5/8 went as typical for Asmussen trainees, in easy fashion, stopping the clock in 1:01.90 on Sunday.

Tone Broke has run at Remington Park previously, breaking his maiden and winning in allowance company last year before a fourth in the Springboard Mile. From there, he started twice in Dubai, missing the board in a pair of races at Meydan before returning to the U.S. for a successful spring and summer series of races.

Zia Park's derby day card, run on the eve of Thanksgiving, features seven stakes in all.