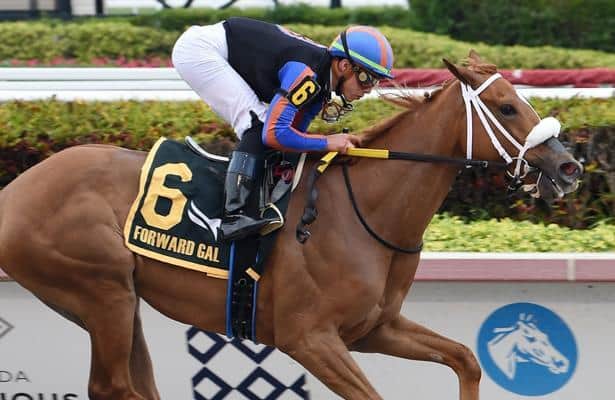 While Tonalist’s Shape cut back in distance, she stepped toward the 2020 Kentucky Oaks on Saturday delivering more impressive Gulfstream Park results when guided confidently to a victory in the Grade 3, $150,000 Forward Gal.

The 3-year-old daughter of Tonalist, trained by the red-hot Saffie Joseph Jr., was away a bit slow but gradually ran herself back in contention by the turn, ranging up three-wide outside of pace-setting Compensate.

Tonalist’s Shape continued advancing until just shown the stick by jockey Irad Ortiz Jr. at the top of the lane. She had them beat from there, hitting the wire under wraps in 1:24.77 for seven furlongs.

"I got a perfect trip," Ortiz Jr. said. "She broke out of there a little slow, but she usually does that. She worked her way up pretty quick and after that I just went with the flow. When I asked her turning for home, she really responded. She did everything right.”

The victory improved Tonalist’s Shape to 4-for-4 for the connections of Slam Dunk Racing, Doug Branham and Legacy Ranch. She entered off a winning stakes debut in Gulfstream’s one-mile Hut Hut after advancing through maiden and allowance conditions.

“It’s so important that she wins a graded stake because they paid good money for her and now it makes her valuable in that sense," Joseph Jr. said. "This race came by design. It was to give her a break for the Forward Gal and go through the Gulfstream series because they have a good series for 3-year-old fillies. Today was the first steppingstone.

The Forward Gal awards Kentucky Oaks qualifying points on a 10-4-2-1 scale to its Top 4 finishers. Behind Tonalist’s Shape, Street of Dreams ran second, and Nikki and Papa got up for third in her career debut despite completely blowing the break.

Joseph Jr. said Tonalist's Shape "most definitely" would continue on the road to Churchill Downs through Gulfstream Park, which hosts the Davona Dale (G2) on Feb. 29 before the March 28 Gulfstream Park Oaks (G2).