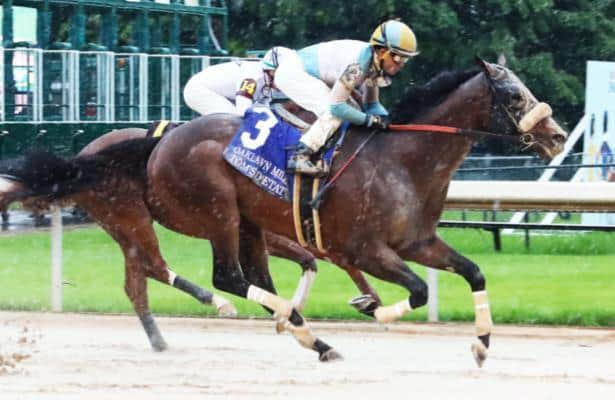 Given plenty of prior attempts during a stop-and-start career for Tom’s d’Etat, trainer Al Stall Jr. expected the 7-year-old to fire off the layoff in Saturday’s Oaklawn Mile — and he did, surging past Improbable in a short stretch to win his third straight stakes going back to last season.

“It’s almost like there’s a little formula for it,” Stall said. “We expected him to run an ‘A’ race with his last two or three breezes signaling he’s himself.”

Tom’s d’Etat will similarly come off the bench in his next start with Stall saying Sunday a return in the May 2 Oaklawn Handicap (G2) is a “definite no” for G M B Racing’s son of Smart Strike.

“We want to get him to his home and our home track, Churchill Downs,” Stall said. “Like everyone else, I’m hearing little drips and drabs of when Churchill might get going with a lot of balls in the air.”

Reopening of the Louisville, Ky., track’s stable area is scheduled for April 28 with the beginning of the Spring Meet postponed. But should Churchill open for racing, finding a way to run sans fans with no end in sight for the COVID-19 pandemic, Stall sees a pair of opportunities on the schedule for Tom’s d’Etat.

“We’re not going to be all emotional about things like that, but if it’s the only game in town and he’s ready to go, something like that could be a distinct possibility.”

The Blame Stakes serves as a local prep for the Stephen Foster (G2) scheduled for two weeks later than is traditional on June 27. The Foster usually runs as a “Win and You’re In” toward the Breeders’ Cup Classic, Tom’s d’Etat’s goal race in November at Keeneland.

The Oaklawn Mile cut Tom’s d’Etat back to the distance for the first time since Nov. 4, 2018, when he won an allowance optional claiming race at Churchill Downs signaling his readiness for stakes company. Since then, he has run consistently, able to avoid the type of injuries that led him to be such a lightly raced older horse with 10 victories in 17 career starts.

“For him to do what he did — Joel (Rosario) never turned the stick up at him at any point and run the fastest time of the meet — it was a great race,” Stall said, with Saturday's final time in 1:35.83.

“It didn’t seem like it bothered him too much afterward. He was really relaxed and playful after the race. I think we got the type of race we were looking for to get us started on the right foot for the year.”