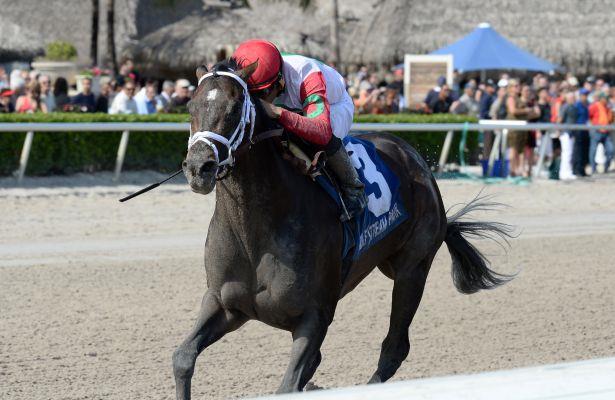 Photo: Gulfstream Park
Already a graded stakes winner when he arrived in South Florida last winter, Paul Pompa Jr. and J Stables’ Tommy Macho put forth a career-best effort to beat a solid cast in the Fred Hooper (G3) 11 months ago at Gulfstream Park.
Just as he was rounding into top form, the bay son of Macho Uno emerged from that race with a knee chip that required surgery and kept him away from the races for eight months. Following a pair of off-the-board finishes to end 2016, Tommy Macho returns to Gulfstream for his 5-year-old debut in Saturday’s $150,000 Hal’s Hope (G3).
The 31st running of the one-mile Hal’s Hope for 4-year-olds and up is one of three graded stakes on the 12-race program, along with the $200,000 Fort Lauderdale (G2) for 4-year-olds and up and $150,000 Marshua’s River (G3) for females 4 and older, both at 1 1/16  miles on the grass. First race post time is noon.
Tommy Macho, third in his career debut in February 2015 at Gulfstream, went on to run third in the Dwyer (G3) and Pennsylvania Derby (G2) before a 4 ½-length score in the Discovery Handicap (G3) that fall. Beaten as the favorite in the Queen’s County Stakes to end his sophomore season, he kicked off last year with an impressive victory in the Fred Hooper.
In that race, he rallied from next-to-last after a half-mile with a four-wide move to take the lead at the top of the stretch and draw off to win by 3 ¾ lengths over multiple graded stakes-winning stablemate Stanford.
“Unfortunately when he won last year he injured his knee and had surgery,” trainer Todd Pletcher said. “Honestly, his last couple of races have been a little bit disappointing but he seemed to really like Gulfstream last year so we’re hoping to get him back on track.
“His race here last year was ultra impressive. We know he’s got it in him; we just need to get him back in top form,” he added. “I think he was a little rusty off the layoff. He’s training with enthusiasm now, so hopefully he runs like it.”
Tommy Macho made his return in the one-mile Kelso (G2) Oct. 8 at Belmont Park, where he tired to finish last of five after a wide trip. He capped the year finishing fourth, beaten four lengths, in the 1 1/8-mile Richard W. Small Nov. 19 at Laurel Park.
“The Kelso was maybe a bit too much to ask first time off the bench and then we stretched him out to a mile and an eighth at Laurel and I don’t think he loved the surface there that day and he got a little late the last part of it,” Pletcher said. “Hopefully with those two races under his belt he’s ready to fire his best shot.”
Luis Saez will ride Tommy Macho from Post 2 of nine at 119 pounds for Pletcher, who won the Hal’s Hope with Quality Road in 2010 and Mshawish last year.
Among the horses looking for their first stakes win in the Hal’s Hope is Marylou Whitney’s Bird Song, front-running winner of a one-mile, second-level optional claiming allowance Nov. 24 at Churchill Downs to cap his 3-year-old season.
It was the third win in five starts for the gray or roan son of Unbridled’s Song, who broke his maiden and won an entry-level allowance, both at six furlongs, in back-to-back efforts last summer. He was a disappointing eighth in the King’s Bishop (G1) at Saratoga in his stakes debut after racing near the back of the pack in the seven-furlong sprint.
“He won and then won again, so he put us in a position where you’re looking at stakes races, but he wasn’t quite seasoned enough for it. And I rode him wrong that day,” trainer Ian Wilkes said. “I should have let him run a little more. I made the decision but first time in a stake, I should have let him just run a little more and I didn’t.
“He’s so talented,” he added. “He’s getting better. I was playing catch-up all last year with him. I felt like I was always chasing his tail. Finally at the end of the year I felt like I got him where he should be. He’s a really nice horse.”
Bird Song tuned up for the Hal’s Hope with a five-furlong breeze in 59.35 seconds Jan. 5 at Palm Meadows, Gulfstream’s satellite training facility in Palm Beach County. It was the fastest of eight horses at the distance.
“The horse is doing good. I was very pleased with the work,” Wilkes said. “We came back and got him back on track and I feel like now he’s taken off. The horse is doing well, he’s training good. I wouldn’t run him if he wasn’t. I don’t see a reason to keep him in the barn.”
Julien Leparoux is named to ride Bird Song from Post 3 at 117 pounds.
Florida-bred gelding Mr. Jordan, whose four career stakes wins includes the 2015 Pegasus (G3), takes a two-race win streak into the Hal’s Hope, a race where he finished fifth last year. He placed in six consecutive stakes last year, three of them graded, before taking a Parx allowance by 9 ¼ lengths Oct. 17 and the Millions Classic Preview by 3 ¾ lengths Nov. 12 at Gulfstream Park West. He will carry jockey Joe Bravo and topweight of 121 pounds from Post 8.

Grade 3 winner Ami’s Flatter, third in the 2015 Florida Derby (G1); Team Colors, making his first start since finishing second in the Skip Away (G3) April 2 at Gulfstream; Dolphus, a half-brother to Hall of Fame mare Rachel Alexandra that romped in a seven-furlong off-the-turf optional claiming allowance Dec. 11 at Gulfstream; Realm, most recently third in the Cigar Mile (G1) Nov. 26; and Grade 3-placed Unbridled Outlaw, coming off a seven-furlong allowance win Nov. 23, round out the field.