Tom Knust has spent 5 decades and counting in Calif. racing 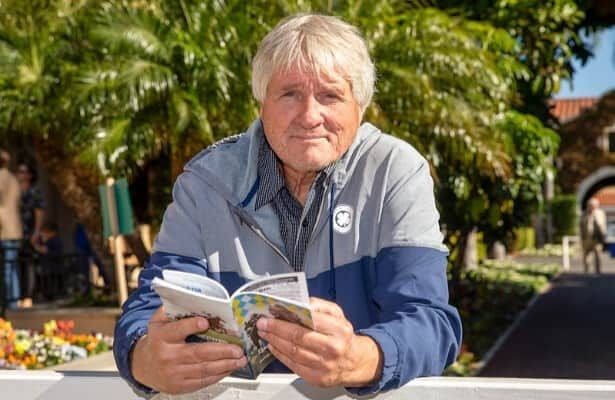 If you’ve been around Del Mar for any length of time, you probably ran into – and maybe even met – Tom Knust. He has been coming out to Del Mar since he was a teenager and has made a lifetime career out of his love for the horses.

Knust is now 75 years old and currently the agent for jockeys Victor Espinoza and Edwin Maldonado. But his journey to this place in his life has been filled with peaks and valleys and, had a Vietnam corpsman’s diagnosis been correct, there wouldn’t be a story to tell.

“I moved with my family to Arcadia when I was a junior in high school,” Knust begins. “I only lived a few blocks from the track (Santa Anita). The first time I went to the track I went with my best friend. We had to sneak in because you had to be 21 at that time. I made two bets, had two hot dogs and a coke and I left with 80 cents more than I came with and I thought ‘This is the greatest game in the world.’ From that time on I’ve been stuck with it.”

That was in 1964. A few years later he found himself on his one and only tour in Vietnam and, like so many others, it changed his life.

“I was with the Second Battalion, Ninth Marines,” Knust says. “We were an infantry battalion up in the DMZ. I had only been in Vietnam for less than a month and one time we were out in the field for nine days. Usually you go in the field for two or three days at the most. We were in a lot of firefights and when you’re out in the jungle sometimes you’ll find a path and it’s your job to go up that path and see what’s there and then come back. This one time we got ambushed and I got shot in the head.”

Corpsmen conducting triage at the site where several Marines had been wounded, passed over Knust, believing at the time he was past the point of being saved.

“I heard one of the guys conducting the priorities,” Knust says. “I remember it vividly he said: ‘Oh, he’s a vegetable. We’ll just leave him until later.’ It wasn’t very good bedside manner.”

Knust defied the medic’s best judgment and survived the ordeal, though the road to recovery was difficult.

“I was paralyzed on my right side for about six months,” Knust remembers. “I spent the time at the hospital down in San Diego, the Balboa Naval Hospital (now known as the Naval Medical Center San Diego). I couldn’t move anything on my right side and the doctors didn’t know what would come back or how much would come back. Then one day I moved my little finger and eventually everything came back but my foot. I have drop foot. I can’t move my ankle on my right side. All in all, I was pretty lucky.”

Lucky indeed. Since then Knust got married to his now bride of 49 years. They have a daughter and Knust has a son he just found out about a few years ago. Both have given Tom a total of four grandkids.

“This past Veterans Day I was at a restaurant and there was a guy wearing a Vietnam Veteran hat with his daughter and grandkids,” Knust says, “and I thought to myself, for the first time, I could have been killed and then I wouldn’t have any grandkids. That made me emotional.”

When he left the Marines and went looking for a life, Knust turned to horse racing and he’s been involved it for over 50 years now.

“I started walking hots for trainer Joe Dunn,” Knust recalls. “Then I got a job as a groom for Reggie Cornell. I went on the fair circuit and was an assistant trainer for a while and then I got my trainers’ license.

“I got married and we were going to have a baby,” he says. “I went to see Mr. (Jimmy) Kilroe. He was the head of Santa Anita and the dean of racing at that time; probably the most respected person in racing. I wanted to try and get a job in the racing office. He told me if I go back to the University of Arizona and get a degree in their racetrack management program, he promised to get me a job.”

So he went to the U. of A. and got a degree in Animal Science with an option in racetrack management.

“I went back to Kilroe and he gave me a job in the stable office as a clerk,” Knust says, “and that’s where I started. I moved over to the racing office. I moved up from being a clerk there to being a placing judge, then an assistant handicapper to assistant racing secretary.”

That’s when Knust started taking jobs as a racing secretary at smaller tracks around the state.

Knust’s days at Del Mar date back to before the new grandstand was built in 1991. He fondly remembers the old wooden grandstand and the black top where fans could bring their coolers filled with beer.

“My wife used to come with our baby and sit on the old brick wall just inside the main entrance,” Knust says, “right where the grandstand would be. There was a lot of history in the adobe grandstand. I liked it. I thought it was really cool.”

Knust landed his first big gig in Minnesota where he became racing secretary at Canterbury Downs when it was first built. But after five years he came back to Southern California to be racing secretary at Santa Anita and Del Mar, a job that lasted 10 years. And then the ax fell.

“When Frank Stronach bought Santa Anita I worked for him for one year,” Knust remembers. “Cliff Goodrich was the general manager and when he retired they brought in a new GM who fired everybody; myself, Tom Robbins, Craig Dado, all of the department heads.”

That new GM lasted a year and then he was gone. As for Knust, as one door closed, a new one opened.

“I needed something to do,” Knust says. “Tom Robbins made a deal with Del Mar that he would work here year round so that made me the odd man out. I had to do something to make a living. I didn’t want to go out of state and there was an opportunity to pick up Kent Desormeaux, so I became a jocks' agent and I’ve been an agent ever since.”

That was 22 years ago. He’s had about 16 jockeys since he started, some he’s let go and some who have let him go.

“I like it a lot,” Knust says. “I had Corey Nakatani, P. Val (Patrick Valenzuela), Kent Desormeaux. I’ve had Richie Migliore, Kevin Krigger, David Cohen, Abel Cedillo. I had Jose Valdivia, Jr. for a while. We won the Santa Anita Derby together and then he fired me after that. I had Jon Court for two years.”

Knust has learned you have to grow a thick skin in his line of work and not take anything personal.

“They’re all good people,” he says, “but with everybody, if they’re not doing good, they want to make a change whether it’s me or them. I don’t mind somebody firing me. But when I have to tell somebody I’m going in a different direction, that’s the hard thing. I’d rather they just fire me, it makes it a lot easier.

“It is a competitive job,” Knust continues. “You have good times and bad times. I had Patrick Valenzuela four different times; I had Nakatani twice. A lot of good riders but there’s a lot of things that go along with it that are not good. You can’t blame them when they’re riding, their lives on the line every day. But you start out good and everybody’s happy and then things start to go south and everybody wants to change.”

He says in his line of work it’s all about relationships.

“Then you keep track of the horses you’ve ridden,” Knust says, “and when the (condition) book comes out, you mark the horses you want to ride back and fill in the other races with new horses. It’s a continuous thing from day to day. You also have to set up (morning) workers for your jockeys which is very important in this game because, again, relationships. You might work horses you don’t ride and somebody might work the horses you ride. It all balances out.”

“I still think it’s a game that can survive,” Knust says. “I just don’t think there will be as many racetracks in the future. We have to compete with the tracks back east that, number one, have casino money and number two, you can race in two or three places within a two-hour drive. So that puts us (West Coast racing) on an island.

“For 50 years we’ve tried to get stables to come out here and stay,” Knust explains, “and none of them do. I think a lot of it has to do with the competition. It’s very, very tough out here.”

Knust’s involvement in racing has afforded him the opportunity to meet some interesting people over the years.

“When I worked at Hollywood Park,” he remembers, “I used to ride up on the elevator with Cary Grant all the time. Dwight Yoakum had horses. I was good friends with B. Wayne Hughes before he passed. I’m really good friends with Marty Wygod and Paul Reddam. Now we’re riding for Lee Searing. He puts a lot of money into horse racing. Jed Cohen, of Red Baron’s Racing, he’s a good friend and he’s put millions into the game. Gary Barber is a good friend.

“You also have opportunities to be with people who aren’t so famous, don’t have a lot of money but they’re good people,” Knust says, “The track gets you in a situation where you can meet a variety of different people.”