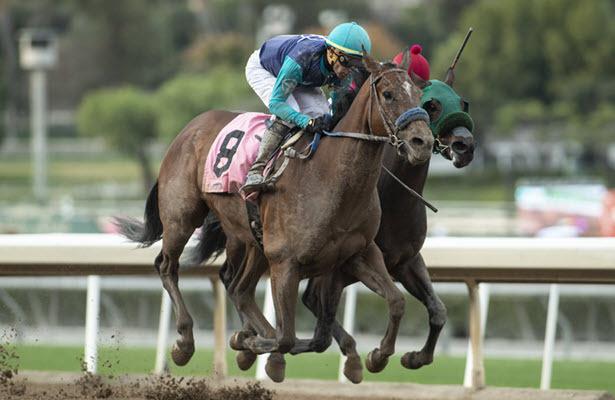 In a topsy turvy race that saw a heavily favored pacesetter concede the lead to an 11-1 longshot 4 1/2 furlongs from home, only to be reeled in a furlong out, Neil Drysdale’s classy Toinette, idle since Dec. 1, proved much the best in winning Saturday’s Grade 3, $100,000 Wilshire Stakes by 2 3/4 lengths. Ridden by Flavien Prat, Toinette got a flat mile over the Santa Anita turf in 1:35.20.

Breaking from the outside in a field of five fillies and mares, Toinette, while under restraint, put immediate pressure on Keeper ofthe Stars into the Club House turn, making the lead as the field turned up the backside. From there, Mike Smith, aboard Gypsy Spirit, could wait no longer and he forged to lead in the run to the far turn, providing the winner with a target, on which she took dead aim.

“It was a strangely run race, but I liked the outcome,” said Drysdale, who last started 5-year-old Toinette on Dec. 1. “You’re always a little concerned when a horse has had six months off. It’s great to have her back.”

“There was no pace,” said Prat. “She was a little fresh, she took me into the race. The 3 horse (Gypsy Spirit) made the move to the outside, she got the race to go. My horse took a little breather and she was in the race from there. I didn’t want to be on the lead, so I was glad there was a horse that made the move and made some pace.”

A 5-year-old mare by Scat Daddy out of the Sunriver mare I Bet Toni Knows, Toinette, who is owned by Ken Baca and Edward and Lynne Hudson, notched her fourth graded stakes win and her eighth win from 12 lifetime starts. With the winner’s share of $60,000, she increased her earnings to $566,720.

Irish-bred Red Lark, who trailed the field to the top of the lane, made a good run into a tepid pace and was up for second money by a half-length over Querelle. Ridden by Drayden Van Dyke, Red Lark was off at 14-1 and paid $6.60 and $4.20.

Next to last early, Querelle, who was ridden by Umberto Rispoli, was just up for third, finishing a neck in front of Gypsy Spirit.  The longest shot in the field at 26-1, Querelle paid $6.00 to show.

The second choice at 6-5, Keeper ofthe Stars, who was immediately engaged by the winner, never seemed comfortable and tired to finish last with Abel Cedillo up.