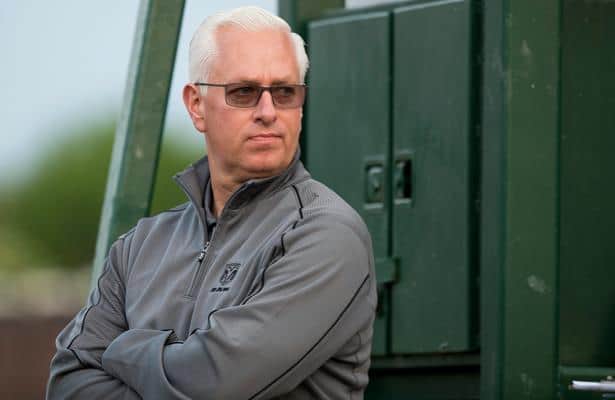 “When you’re preparing for the Breeders Cup, they’re all important, but these were big breezes this morning,” Pletcher said. “We’ll come back next weekend and do a little bit less with them.”

“I liked it,” Pletcher said of the breeze. “It seemed like he bounced out of the Vosburgh very well. It was a very easy breeze for him this morning. We weren’t looking to do a whole lot with him this morning. I was very happy.”

Although Following Sea earned an automatic entry into the Breeders’ Cup Sprint in capturing the Vosburgh, a “Win And You’re In” event, Pletcher said plans for the son of Runhappy remain in flux.

“We wanted to see today’s work and then we’ll talk to the Spendthrift guys about it,” Pletcher said. “We’re under no pressure to make a decision right away. We’ll give him the rest of the week and continue to monitor how he’s doing.”

Graded stakes winners Life Is Good and Mind Control logged solo works at roughly 7:45 a.m. over the training track. An in-hand winner of the Kelso (G2) on Sept. 25, CHC Inc. and WinStar Farm’s Life Is Good went a sharp half-mile in 47.83 seconds – the second fastest of 41 recorded works at the distance.

Red Oak Stable and Madaket Stables’ Mind Control, winner of the Parx Dirt Mile last out on Sept. 25, went five furlongs in 1:01.27. Both horses are on target for the Breeders’ Cup Dirt Mile.

“Typical works for them,” Pletcher said. “Life Is Good is a very impressive horse to watch breeze. It looks like he’s doing everything very effortlessly and then you look down at the clock and go, ‘Wow’. He was rolling right along. He did it in hand throughout.”

The Parx Dirt Mile was the first two-turn start for Mind Control, a 5-year-old son of Stay Thirsty, since finishing off the board in the 2018 Breeders’ Cup Juvenile. He captured the John A. Nerud (G2) on July 4 at Belmont Park in his first start for Pletcher two starts earlier.

“He’s coming off a good win,” Pletcher said. “He’s trained with good energy like he always does. He had an impressive breeze today and I like where he’s at.”

“I thought she worked great today. She’s just very impressive,” Pletcher said. “She keeps going and going and gallops out super. I think the time in between races has done her well. She’s put on some weight and she seems very fit and happy.”

Malathaat has captured a trio of Grade 1 events this year, including the Ashland at Keeneland, Kentucky Oaks at Churchill Downs and Alabama at Saratoga.

Phoenix Thoroughbreds’ Double Thunder, runner up in the Breeders’ Futurity at Keeneland (G1), went a half-mile with blinkers on in 49.98 seconds.

“Everyone looked great this morning and came out of their works in good shape,” Pletcher said.