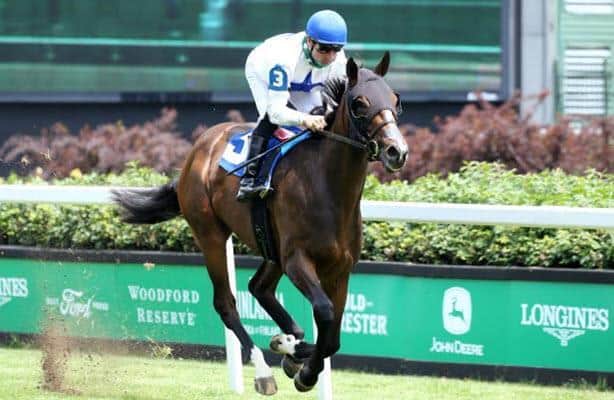 Tobys Heart will look to build on an impressive first-out effort when she steps up in class to make her stakes debut in Wednesday's $85,000 Bolton Landing for juvenile fillies at Saratoga Race Course.

The sixth running of the Bolton Landing, contested at 5 ½ furlongs on the Mellon turf course, drew an eight-horse field. Among them is Tobys Heart, co-owned by Terry Hamilton and trainer Brian Lynch, who dominated in her first appearance with a 6 ¾-length score against eight competitors on June 4 at Churchill Downs.

Her effort at the Bolton Landing's distance, which saw her track in fifth position through the opening quarter-mile before gaining command by the three-quarters mark and drawing away, earned her a field-best 86 Beyer Speed Figure.

"She showed me she had some talent prior to it with her works, so it was great to see it produce that sort of performance in her debut," Lynch said. "Her works since have been great and seems to be doing really well. We're looking forward to taking the next step here."

A daughter of Jack Milton, a Grade 1-winning miler by War Front, Tobys Heart will ship for a race for the first time after training at Churchill since May. The $45,000 purchase in March at the Ocala Breeders' Sale put in a final strong work in Kentucky on Thursday, going four furlongs in 48.80 seconds over Churchill's main track.

"I think she's up against horses that haven't done much more than her other than break their maidens," Lynch said. "It'll be interesting to see. She's been a very exciting filly and has done everything great. We feel she's the real thing, but until you rack them up and turn them loose, you don't know. But she gives me the feeling that she's a nice filly in the making."

A solid performance in a Saratoga juvenile stakes could set up the rest of her 2020 campaign and potentially include added distances, Lynch said.

"I feel good about her when the time comes to stretch her out because she's a very easy filly to train," Lynch said. "She relaxes in the morning in the gallops and she's not too hard on herself. When you drop the clutch on her, you usually get a tone of gas. The 5 ½ furlongs is a good transition coming out of her last race. The sky is the limit if she takes that next step forward for us."

Jose Ortiz will pick up the mount from post 6.

Trainer Wesley Ward will also send out a debut winner in Amanzi Yimpilo, who was a 2 ½-length victor in a five-furlong turf sprint on June 10 at Gulfstream Park. The Irish-bred daughter of No Nay Never has been training at Saratoga since July following her wire-to-wire win.

Amanzi Yimpilo, purchased for $300,000 at the Keeneland September Yearling Sale last year, breezed four furlongs last Saturday in 50.63 over the Oklahoma turf training track. Irad Ortiz, Jr. will be in the irons from post 8.

Patricia Generazio's Mischievous Dream was a one-length debut winner for trainer Christophe Clement on July 19 at Saratoga. Returning four weeks later, the Into Mischief filly will again compete at 5 ½ furlongs on the grass. Tyler Gaffalione will have the return call from post 9.

Team Hanley's Joy's Rocket is 2-for-2 and will now try turf for the first time for Hall of Fame trainer Steve Asmussen. The daughter of Anthony's Cross won by a nose over a sloppy Churchill main track on June 28 and returned to post a win over Woodbine's all-weather track in the My Dear on August 1.

Ricardo Santana, Jr., aboard for her first win, will be aboard again, breaking from post 2.

Briannjenn Racing's Hara is the field's most experienced entrant with three starts, including a fourth-place effort in the Schuylerville (G3) on July 16 going six furlongs at Saratoga.

After running second in her first start in May at Gulfstream, trainer Antonio Sano saw her break her maiden the next month at the same track, posting a six-length win in a 5 ½-furlong sprint on June 19.

Moving up to stakes company, Hara tired in the stretch in Schuylerville but has registered three strong turf works at Saratoga since in preparation for her grass debut. She will get a new rider in Luis Saez on Wednesday, drawing post 1.

Arindel's Quinoa Tifah won her first start on April 16 at Gulfstream in a 4 ½-furlong dirt dash, defeating 1-5 favorite and Ward trainee Lime by three-quarters of a length.

Stretched out to six furlongs, she ran sixth in the Schuylerville after encountering traffic issues, being bumped on both sides at the start and never recovering.

"She came out of it good," trainer Juan Alvarado said. "She's been training at Saratoga since then. She's breezed there and likes the track."

Sweet Souper Sweet, a three-length winner over the all-weather track Woodbine on June 27 in her first start, will take the step up in class for trainer Michael Trombetta, drawing post 3 with Hall of Famer John Velazquez picking up the mount.

The unraced Sassy Hannah will round out the field for trainer Eduardo Caramori. The daughter of War Front made her last two breezes from the gate at Saratoga, including a bullet five-furlong work in 59.77 on Wednesday. David Cohen will have the assignment from post 5.

Ward also entered a pair for the main-track only in Stylish Rags, a debut winner on July 31 over the Spa's main track, and Sunny Isle Beach, a first-out victor in June at Churchill Downs.

The Bolton Landing is slated as Race 8 on Wednesday's nine-race card, which offers a first post at 12:50 p.m. Eastern.