Tiz the Law to stand stud at Coolmore after retirement 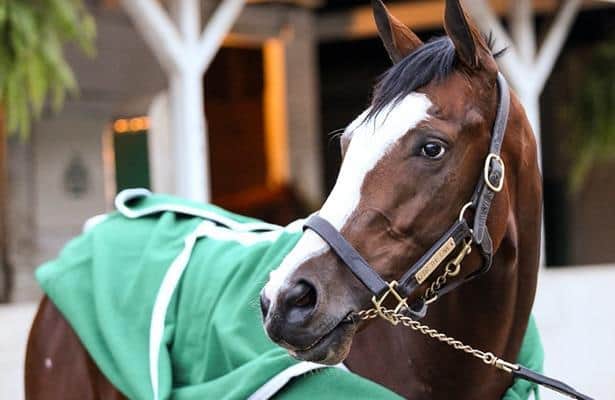 Fresh off his 3 3/4-length win in the Belmont Stakes on Saturday comes word that Tiz the Law will stand at Coolmore America’s Ashfort Stud on his retirement.

The son of Constitution and winner of five of his six career starts will continue to race for owners Sackatoga Stable for the rest of his racing career, according to a news release.

“Tiz The Law is the outstanding colt of his generation, so we are obviously delighted he’ll be coming here,” Coolmore America manager Dermot Ryan said in the release. “From day one when he broke his maiden at Saratoga, we have been watching him closely and he has everything one looks for in a stallion prospect. We are grateful to Jack Knowlton and his partners in Sackatoga Stable for letting us be a part of such an exciting horse, and also to Barclay Tagg, Robin Smullen and their team who have done a tremendous job with him. He’s a Grade 1-winning juvenile and is now a Classic winner. Combined with his near perfect race record, he’s very good-looking and is a very well-bred individual.”

RELATED: Tiz the Law deserves Horse of the Year consideration

Constitution was second only to American Pharoah on the Freshman Sires table last year and leads the way in 2020, according to the release. And Tiz The Law’s dam, Tizfiz, won seven races, including the Grade 2 San Gorgonio Handicap carrying top weight of 118 pounds.

“Tiz The Law is such a pleasure to be around, he impresses me every day with how easy he does everything, nothing is out of reach for him,” Tagg said in the release. “I have been training horses for such a long time, and I have never had a horse like him. He makes my life very easy. We are looking forward to running him in the Travers then on to the Derby and Preakness. He has achieved so much already and is a very exciting horse for the future. I wouldn’t change him for the world.”

Jack Knowlton, operating manager of Sackatoga Stables, said in the release: “Sackatoga Stable is pleased that Tiz The Law will stand at Coolmore America’s Ashford Stud. It is an honor that he will become a part of the world’s largest breeding operation of Thoroughbred racehorses. We are excited to see what Tiz The Law has in store on the track for the remainder of his 3-year-old year and beyond, and then look forward to his career as a stallion at Ashford.”