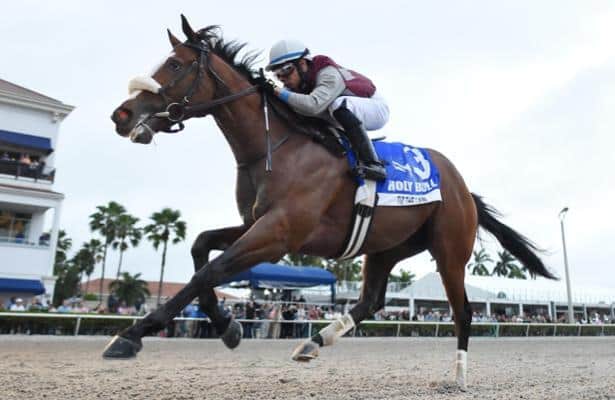 Jack Knowlton, head of Sackatoga Stable, suggested Saturday that Tiz the Law can thrive beyond the June 20 Belmont Stakes given the timing of this season’s other major races for 3-year-olds. That includes what he’s heard about when Saratoga’s Travers Stakes (G1) will run.

Speaking on the Horse Racing Radio Network’s Equine Forum, Knowlton said the Travers will “presumably” position three weeks before its traditional date, on Aug. 8, to create a one-month gap to the Sept. 5 Kentucky Derby. The Preakness Stakes is then scheduled for Oct. 3.

“Typically, Triple Crown season, you’ve got five weeks for three races,” Knowlton said on HRRN. “This is pretty stretched out, and I really think we’re going into this in a good position.”

The New York Racing Association, which returned to action this week at Belmont Park, hasn’t yet released a Saratoga stakes schedule, which could include one or more races that become part of the points-paying Derby prep series. Reporting for VSiN, Ron Flatter confirmed on Thursday that the Mid-Summer Derby will measure its usual 1 1/4 miles.

Belmont Stakes fave Tiz the Law stretching his legs on Big Sandy this morning...I like the sneaky second look from the pony too ?? pic.twitter.com/oEHmRF5FyF

Knowlton was also privy to early word that the Belmont Stakes would be pushed back to later in June rather than relocate to the fall with other classics. Such are the benefits of campaigning a leading 3-year-old colt.

Barclay Tagg-trained Tiz the Law has relocated to New York, where on Sunday he’s expected to post his next work toward the Belmont Stakes. The son of Constitution will have had 11 weeks since a stirring victory in the Florida Derby (G1), which came eight weeks after he won the Holy Bull (G3) off another layoff.

Knowlton said he'll “have a very fresh horse coming into the prime season.”

“We certainly would have preferred to have been at Churchill the first Saturday in May," Knowlton added on HRRN. "I think Barclay had him absolutely perfectly positioned for that.

“But now we’ll go the other route and hopefully follow up the Belmont with the Travers and then the Derby repositioned and the Preakness.”

Tiz the Law has won four of five career starts, with his only defeat coming in Churchill Downs’ Kentucky Jockey Club Stakes (G2) last November. That day, over a sloppy track, he got away from the gate slow and was boxed in most of the way.

“Nothing fazes this horse,” the owner said. “He is laid back, and he’s just great around the stable — doesn’t get excited. Just his demeanor, I think, is very important.

“Secondly, he has a burst, and we’ve seen it in some of his races where he’s in the middle of races and all of a sudden he’s just passed everybody. I haven’t seen too many Thoroughbreds that have that.”