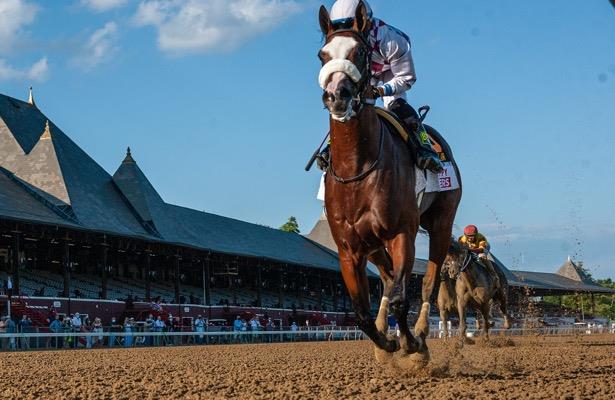 Tiz the Law left no doubt Saturday. When it comes to 3-year-old males, he’s the one to beat.

The Sackatoga Stables star dominated Saratoga’s Grade 1, $1 million Travers Stakes. He cruised by Bob Baffert-trained Uncle Chuck going into the stretch, then rolled to a geared down victory of 5 1/2 lengths.

“We saw a performance today that just blows me away,” Sackatoga managing partner Jack Knowlton said.

Tiz the Law entered the 151st running of the 1¼-mile Travers with a 3-for-3 record in his 3-year-old season – including a last out victory June 20 in the Belmont Stakes. Bettors backed the New York-bred son of Constitution to 1-2 favoritism.

Of Tiz the Law’s six rivals Saturday, California shipper Uncle Chuck was seen as the one most likely to mount a challenge. He went off at 5-2 and rode to fractions of :23.65 and :48.36.

But Tiz the Law and jockey Manny Franco sat just to the leader’s outside, waiting to take charge. And while Uncle Chuck’s rider Luis Saez went to the whip coming through the turn, Franco didn’t have to move a muscle.

"When I pressed the button, he just took off," Franco said. "He accelerated really hard. After that, I took a peek back and he was going away and I just saved horse."

Tiz the Law opened up a huge lead before waltzing through the final yards. The Barclay Tagg trainee crossed in 2:00.95 for a victory that returned $3 – and made him even more likely to be a heavy favorite Sept. 5 in the Kentucky Derby.

"It's the way I thought he would be all along," Tagg said. "I thought he'd have to come to Uncle Chuck into the stretch and he would go by him if he quit. It went so easy for him, which is fine with me, too. The easier, the better."

Caracaro closed for best of the rest, with Max Player third and South Bend fourth.

Tiz the Law's win was meaningful for his New York-based team. Sackatoga campaigned and Tagg saddled Funny Cide through the 2003 Triple Crown series, but the gelding got sick and was unable to contest that year's Travers.

Seventeen years after Funny Cide's Kentucky Derby and Preakness Stakes scores, Tiz the Law has given his owners and trainer their first Belmont and Travers triumphs.

"I really believe after this race that he is going to be adopted, not only by Saratoga but also by New York, and hopefully the country," Knowlton said. "The mask we have with Tiz on it, we've been getting calls from California and all over the country; they want a Tiz the Law mask. This is the greatest springboard to move on to Kentucky and I think he's proven today that he certainly is a mile and a quarter horse and Barclay has said that all along."