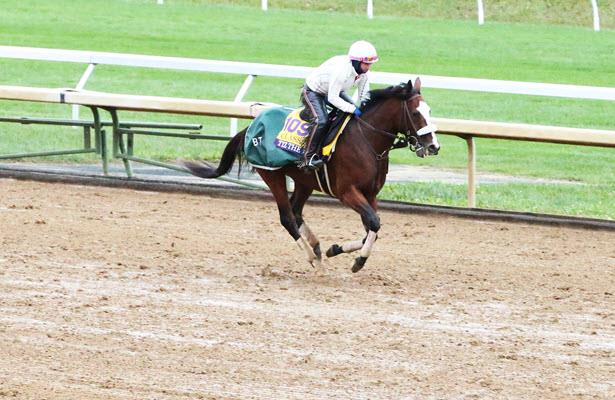 Sackatoga Stable’s Tiz the Law, who looms as one of the favorites for next Saturday’s $6 million Breeders’ Cup Classic, completed his major preparation for the 1¼-mile test by working 5 furlongs in :59.20 and galloping out 6 furlongs in 1:12.20 under Heather Smullen over a fast track at Keeneland.

ICYMI, #NYbred standout Tiz the Law posted his final breeze in preparation for the #BC20 Classic! @hlynnsm guided him through 5f in 59.20. @DRFWelsch observed that the @BelmontStakes winner is, "Heading into Classic as good as he can be." Check out the video from @BreedersCup! pic.twitter.com/cS4NuVplZD

“I thought he needs to get a good feel of this track (because) he has never run over it,” Tagg said of the early arrival. “He has to run against older horses; it is going to be a tough race.

“I have a super-duper crew and everything has gone right (with Tiz the Law). We pay attention to the horses. We carry 30 horses at the most and try to get the best out of what we got and every now and then we get a good one.”

The only Classic pre-entrant to have been at Keeneland longer than Tiz the Law is Hronis Racing’s Higher Power.

Early Saturday morning, Higher Power recorded his fifth work since arriving at Keeneland the first of the month from Southern California.

With Juan Leyva, assistant to trainer John Sadler, aboard, Higher Power worked 5 furlongs in :58.80 and galloped out 6 furlongs in 1:11.60.

“I liked the way he came back from it,” Leyva said. “He was blowing a little bit but not out of this world. His level of fitness has really progressed here.”