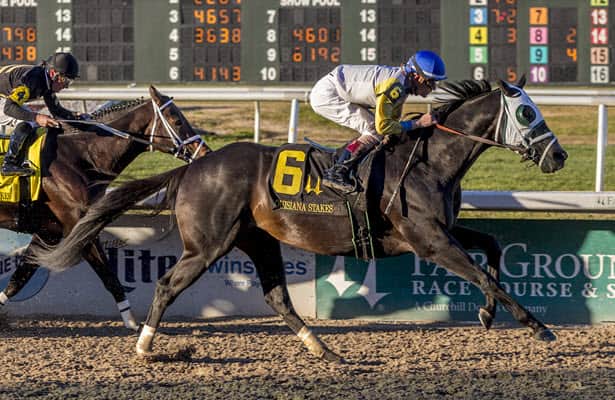 Title Ready ran down pacesetter Blackberry Wine in deep stretch to win the $125,000 Louisiana Stakes for 4-year-olds and up at Fair Grounds on Saturday and earn his first career stakes victory for trainer Dallas Stewart.

Blackberry Wine broke in front and took the field nearly all the way around while carving moderate fractions of 25.28, 49.53, 1:13.91 and 1:38.05 for a mile. He was pursued for most of the race by last year's Louisiana Derby (G2) winner Wells Bayou, who was sent off the 2-1 favorite in his first start since last May

However, the Brad Cox-trained colt came up just short in his comeback attempt, as he tired late to check in third.

Title Ready, ridden by Brian Hernandez Jr., began his move coming out of the final turn, taking the overland route to run down both Wells Bayou and Blackberry Wine to win in a final time of 1:44.27.

Stewart said before the race he thought the race was a fit for Title Ready.

“I think the company will be a little lighter for him, and he tries hard every time he runs,” Stewart said in a Thursday Fair Grounds press release. “That’s the type of horse you want to be around.”

The 6-year-old son of More Than Ready, out of Title Seeker, by Monarchos, earned his first stakes win in his seventeenth attempt. Most recently, he was 10th in the the Nov. 27 Clark Stakes (G1) at Churchill Downs after being shuffled back and stuck inside. Prior to that, Title Ready was seventh in the Breeders' Cup Classic at Keeneland.

Title Ready improved his record to 25: 5-6-3. His previous best graded stakes finish was a runner-up finish in the 2018 Discovery (G3) at Aqueduct.

A Charles Fipke homebred, Title Ready returned $13 for the win as the 5-1 fourth choice in a seven-horse field.