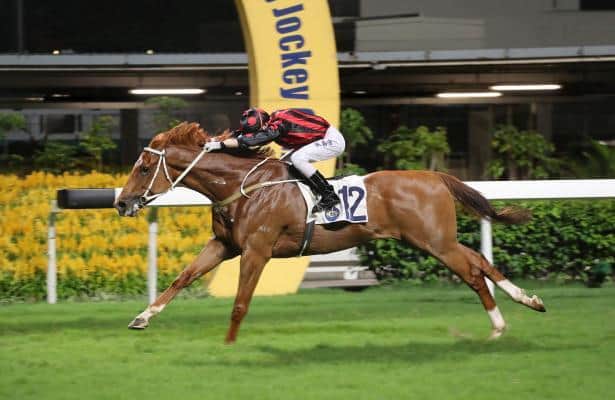 Time Warp smashed the 1800m course record when opening his account at Happy Valley with a powerful front-running display two weeks ago and trainer Tony Cruz is hoping the talented galloper can follow up in the Class 2 Hoi Ha Handicap (1650m) at the city venue tomorrow night (28 June).

“We always thought he could win in the grade but to do it like he did, wow,” Cruz said this morning (Tuesday, 27 June). “He’s in good condition and hopefully he can do it again. He does have a lot more weight this time though and he drops in trip.”

Alvin Ng, who brought up just his third winner of the season aboard Time Warp, will ride the Archipenko gelding once more. The chestnut carried 109lb last start, but has to carry 15lb more this time around, with Ng’s three-pound allowance seeing him race with 124lb.

The Martin Siu-owned British import knocked more than four-tenths of a second off the nine-furlong record but faces a strong field of 11 rivals, including stablemate Super Chic, last year’s G2 Italian Derby hero.

Super Chic, who runs in the colours of Siu’s brother, Edmond, was tested in Four-Year-Old Classic Series races like the Hong Kong Classic Mile and the Hong Kong Classic Cup (1800m), but he proved no match for horses like Rapper Dragon, Pakistan Star and Seasons Bloom as he struggled to acclimatise to Hong Kong.

“He seems a bit of an edgy individual, so it’s probably taken him that tad longer to settle down,” raceday jockey Douglas Whyte said. “He was thrown in the deep end with all those big races coming up in his first preparation. I think he’s starting to get the feel of Hong Kong.”

Super Chic (119lb) dropped to Class 3 and switched to Happy Valley for the first time last start, coming from last over this course and distance and charging into second behind Jade Fortune. Whyte feels that the cushion of the Happy Valley surface was key to the Strategic Prince colt’s improvement.

“I rode him in a 1400m at Sha Tin and firstly, he didn’t have the gate speed for that trip and he just kept getting his head up in the straight when I got after him, perhaps he was feeling the track a little bit,” he said. “Last time, with the slightly forgiving conditions at Happy Valley, he seemed to revel in the conditions and find the line. It was promising. He’s gone up in class, he does get a heap of weight off his back, and if he can reproduce that form from last time, he will be competitive.”

Both Cruz and Whyte feel that Super Chic will relish further than Wednesday night’s 1650m, though.

“He’s a horse that wants much further. He’s going to be an interesting horse for next season when he goes further and when the penny drops,” Whyte said, while Cruz simply added: “He needs a mile and a quarter, but there’s nothing much for him at the moment.”

John Size-trained Big Bang Bong is one of eight rides for Joao Moreira as the champion jockey seeks to break his own record for most wins in a Hong Kong season by a rider. The Brazilian sits on 166 wins, two shy of his 168 mark set last term.

Moreira’s main rival Zac Purton rides Mr Genuine for David Hall as he seeks a milestone of his own. The Australian needs just one more victory to crack the century mark, a feat that he only achieved before in his championship-winning season in 2013/14. He has seven rides.