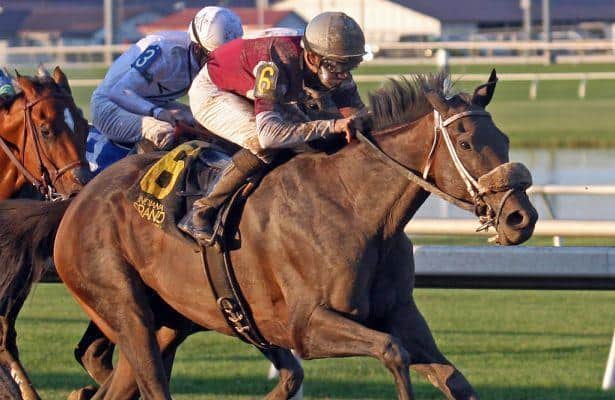 Photo: John Engelhardt
John Gunther’s Tiger Moth earned her first stakes victory, rallying late to take Indiana Grand’s $100,000 Mari Hulman George by 2 1/2 lengths over Mo d’Amour. Big World, a Grade 1 winner two races earlier who was the even-money favorite, finished another neck back third, with pacesetting Improv another two lengths back while nosing out the stakes’ 2016 winner Brooklynsway.
The victory with a horse who paid $17.20 to win took some of the sting out of trainer Brad Cox finishing fourth in the Warrior Veterans a race earlier with strong favorite Chocolate Ride.
Four horses stretched across the track coming to mid-stretch, and that didn’t include Tiger Moth, who was a bit farther back. But the 5-year-old daughter of 2007 Kentucky Derby winner Street Sense was charging hard on the far outside under Florent Geroux, blowing past to win comfortably while covering 1 1/16 miles in 1:43.32.
“That was good,” Cox said, adding with a laugh, “There was no pressure with this one. But she ran well. I like this race. It set up really good for Call Pat two years ago. She just narrowly was beaten, it was a stepping stone. She went on to win three graded stakes. This was her first stakes win; she’s graded stakes-placed. This obviously will help her. She’s obviously got some pedigree (being by Kentucky Derby winner Street Sense and out of the Sir Cat mare Saratoga Cat). This is a big win for her and the Gunthers.
“I thought at the eighth pole we had a shot to definitely be there. She just keeps coming. That’s what I told Florent. You just have to keep riding her, she’ll keep coming. She doesn’t get tired.”
It all worked out great for Geroux, who was already committed to riding Tiger Moth when trainer Tom Amoss decided to enter Big World, on whom the jockey won the Grade 1 La Troienne.
“I was very happy with the trip and the result,” Geroux said. “It set up perfectly for us with a nice pace up front. You are always worried with a Grade 1 winner in the race, but this filly was graded stakes placed this year.”
Ridden by Ricardo Santana Jr., Big World settled into third behind the front-running Improv. Said Amoss: “I thought he had her in a good spot, but down the lane she didn't have the same kick when she won at Churchill (in the La Troienne). The pace set up for a closer, and everyone on the front end backed up except us. Maybe she was just a little too fast early.”

Cox said Ellis Park’s Grade 3 Groupie Doll (which Call Pat won) could be next. Tiger Moth now is 4-4-2 in 16 starts, earning $289,927 with the $58,200 first-place money. While she was third in Oaklawn Park’s Grade 3 Azeri, her prior victories came in a maiden race and two allowance events. In her last three starts, she was a respectable fourth behind champion Stellar Wind in Oaklawn’s Grade 1 Apple Blossom, sixth after being bumped around at the start of Churchill Downs’ Grade 3 Matron and fifth in Churchill’s Grade 2 Fleur de Lis won by the Grade 1 winner Forever Unbridled.