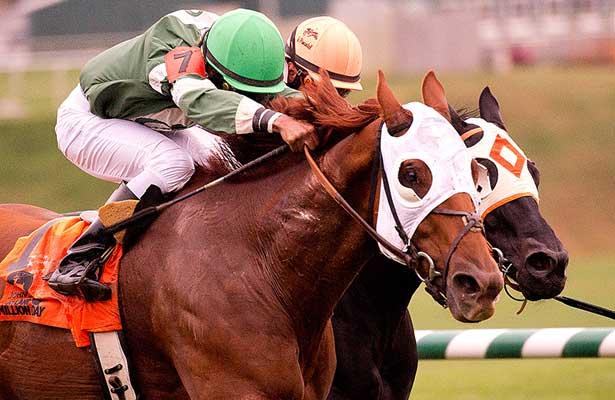 Roadhog will do battle with Ben’s Cat and 10 others in the $125,000 Turf (race 9). Last year, the son of Bowman’s Band rallied to beat Ben’s Cat by a neck for his second consecutive victory in the race. Roadhog has a win and three second place finishes in six starts this year for trainer Lizzie Merryman. The 7-year-old son of Bowman’s Band is the 3-1 second choice on Keith Feustle’s morning line.

“He is coming into the race in good shape but I am concerned about the weather,” Merryman said. “He really prefers a firm turf course even though he won it last year when it was rated good. He came out of the gate in great shape last year, which helped my confidence. He loved the course that day and I am hoping for the same thing Saturday but am very nervous.”

After initially thinking that Ben’s Cat would run in the $100,000 Sprint, owner/trainer King Leatherbury decided to run the son of Parker’s Storm Cat back in the Turf for the second consecutive year. One of the top turf sprinters in the country, the 8-year-old is 27-of-43 lifetime, with 17 stakes victories on the turf, for earnings of $2,175,990. Ben’s Cat is the 8-5 morning line favorite.

“I am disappointed Ben’s Cat went in the Turf,” added Merryman. “It is going to be a pretty competitive field. There are lot of horses coming in off good form and doing really well. Loves Last Chance, Change of Command and Talk Show Man are going to be tough. Willy D’Rocket ran a beautiful race in his last start. His numbers aren’t as high but he beat some good horse that day. Dancing Lounge is no slough.”

Roadhog and Eighttofasttocatch have a chance to join that exclusive group Saturday.

Eighttofasttocatch is the prohibitive 3-5 morning line favorite in the $150,000 Classic (race 10), a race he won two of the last three years, including an easy 3-1/4 length score in 2013. The 8-year-old has won nine stakes races at Laurel Park for trainer Tim Keefe.

“I’m never too confident but I feel confident the way he’s coming up to the race,” Keefe said. “Maryland Million is my favorite day. You get to see everybody here in a fun atmosphere. Things are good in Maryland. Breeding is on the incline. The races are good. The purses are good. Everybody’s getting along. It’s a very exciting time.”

Monster Sleeping is looking to repeat in the $125,000 Ladies (race 5). The daughter of Oratory comes into the race off three consecutive second place finishes for Dale Capuano, including a runner-up finish in the Jameela Stakes here on September 27. Since Capuano claimed Monster Sleeping in March 2013, she has 14 in the money finishes in 19 starts.

“We took the same route to this race as we did last year, prepping with the Jameela,” Capuano said. “She is a model of consistency. Since we claimed her she has been off the board a few times and she had excuses. She shows up every time and I would expect her to do the same Saturday.”

Monster Sleeping is the 5-2 second choice in the Ladies, behind 7-5 favorite Devilish Love. 2012 Ladies winner Pagan Priestess is a 12-1 longshot.

LOOKING FOR LUCKY INELIGIBLE FOR LASSIE

“We have no record that the stallion, Fleet Foot, was nominated for the 2011 breeding season for his 2012 foals,” Maryland Million executive director Cricket Goodall said.

Looking For Lucky will be scratched off the program, leaving a dozen runners in the 6-furlong test on the main track.

MARYLAND’S DAY AT THE RACES

Hall of Fame broadcaster Jim McKay originally proposed the concept and remained Chairman of the Board until his death six years ago. Twenty-two times attendance figures have topped 20,000 for the event.