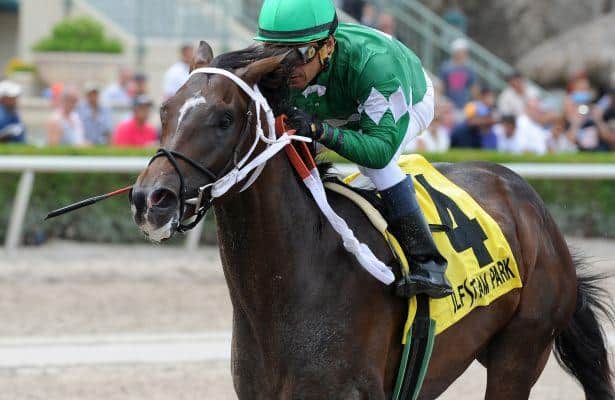 Shade Tree Thoroughbreds’ Three Rules ($4.40) stamped himself as a colt with a big future with his impressive victory in the $75,000 Birdonthewire Stakes Saturday at Gulfstream Park.

The son of Gone Astray tucked in behind early leader Francesco Appeal down the backstretch, but found himself in danger of being shut off heading into the turn. Jockey Cornelio Velasquez kept his cool and waited for the rail to open up, and Three Rules responded readily. He quickly opened up to score by five widening lengths and stopped the clock in 1:04.50 for the 5 1/2 furlongs. Longshot Sonido came running late to complete a $165.60 exacta, and Francesco Appeal finished third.

“He’s the real deal,” winning trainer Jose Pinchin said. “I knew it from the beginning. I was only surprised because I thought he was going to be 3-5.”

A sharp winner of his career opener on June 10, Three Rules was treated with Lasix for the first time in the Birdonthewire. He received an education this afternoon, according to both jockey and trainer.

“I wanted to send a little bit to get position and wait, wait, wait,” Velasquez said. “At the quarter-pole I had a lot of horse. He got some good schooling behind horses. He is a class horse.”

Pinchin confirmed that while offers to buy Three Rules have been received, he intends to start the swift juvenile next in the $200,000 Dr. Fager of the Florida Sire Stakes August 6 at Gulfstream Park.

“We have been getting calls, but I don’t think (the owners) are that interested right now,” Pinchin said. “Why go north? It’s easier money here.”

Three Rules was bred in Florida by Shade Tree Thoroughbreds and Geoff Roy. He has earned $80,640 in winning his first two races.

Curtis Mikkelsen’s Cajun Delta Dawn ($36.60) put in a rousing run up the rail to score in the $75,000 Cassidy Stakes for trainer David Fawkes. A very game winner of her lone previous start, the daughter of Kantharos was dismissed in the wagering in favor of 3-5 White Gold and her fellow Fawkes trainee Perfect Kay, who went postward as the 3-1 second choice.

Perfect Kay broke alertly and went straight to the lead while chased by White Gold through a :22.30 opening quarter. Cajun Delta Dawn secured her spot on the fence under jockey Juan Leyva in third, but appeared to fall further behind her stablemate on the turn. As they straightened for home, Perfect Kay began to drift out slightly, and Cajun Delta Dawn kicked into gear on the inside. She hit the wire a half-length in front of the rallying Lirica, who came flying up the center of the track. Perfect Kay was three-quarters of a length back in third. Cajun Delta Dawn was timed in 1:05.21 for the 5 1/2-furlong Cassidy.

“Down the backside, it looked like Perfect Kay was getting the perfect trip,” Fawkes said. “She looked comfortable. But in the stretch, I’m not sure what she was looking at—maybe the grandstand, I don’t know—and the other filly took advantage of it, and she just caught her. She was professional. If you watch her first race, she kinda ran the same way. She lost the lead and dug back in against the fence. She’s a nice filly. Naturally, we thought Perfect Kay might be a bit quicker going 5 1/2 (furlongs), but Juan rode a perfect race. They did everything right and it set up well for her.”

Fawkes added that Cajun Delta Dawn would likely race next in the $200,000 Desert Vixen of the Florida Sire Stakes at Gulfstream August 6.

”It worked out just like I thought it would,” Leyva added. “I figured the two gray fillies [Perfect Kay and White Gold] would go out there and kill each other off and I’d sit in the garden spot and just get them at the end.

“This filly has a lot of upside. She runs as fast as she needs to and she’s smart. She does whatever I ask her to do.”

Bred in Florida by Mikkelsen and Patricia Horth, Cajun Delta Dawn caught a sloppy track in her June 10 career opener, but battled every step and notched the win by a neck. The unbeaten filly has now earned $81,105 for her connections.