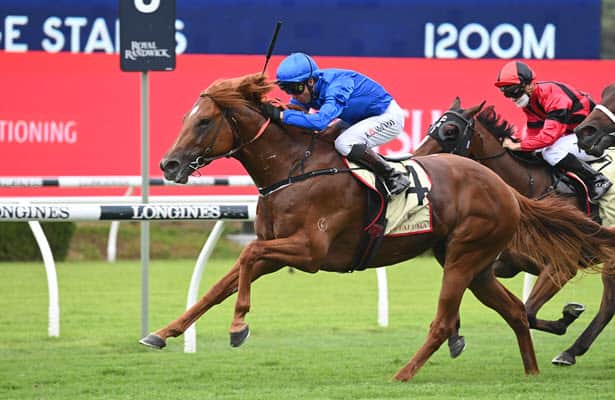 The ten races – including a trio of Group 1s, previewed below – attracted a whopping total of 156 entries plus 27 also eligibles. Josh Fleming, whose race calls will be heard throughout North America, will doubtless sleep well in the aftermath. The extravaganza gets underway at 9:08 p.m. EDT.

Noah’s Ark could have sailed to multiple victories during the last few months of racing on Australia’s east coast. From Sydney’s March-April “Autumn Carnival” riches to the current Brisbane “Winter Carnival,” nary a dry track has been experienced. For the second time in three weeks, a Group 1 race carrying the name of Doomben Racecourse will be run at Brisbane’s other metropolitan track, Eagle Farm. Several stakes races from last weekend’s Doomben Cup program have been incorporated into this Friday night’s card at Eagle Farm, making it a bumper night of racing on a drying Soft 6 turf surface.

The Doomben Cup, Race 5, is contested under weight-for-age conditions at 1-5/16 miles. Zaaki is a red-hot 1-2 favorite to repeat last year’s 7-length demolition job, which announced himself and confirmed trainer Annabel Neasham as new stars of Australian racing.

More recently, in the Queen Elizabeth Stakes, crowning race of The Championships at Randwick in Sydney, Zaaki was being hailed a winner before Nash Rawiller’s inspired move to the outside rail on Think It Over. That moment of genius in the extremely heavy conditions, which will go down in Australian racing folklore, carried the 40-1 shot a ½-length clear of Zaaki with the show horse almost four lengths away.

The Queensland Derby, Race 8 at 1-1/2 miles, is more representative of the tremendous wagering value that abounds on Friday night’s card.

Dark Destroyer (7-2 favorite) and Paternal (5-1) provided the exacta in the Derby’s traditional prep race, the G3 Rough Habit Plate. Pinarello (7-1) brings impressive G2-winning form from New Zealand. Caboche (8-1) looks outclassed, but is being “kept safe” by bookmakers because of the Chris Waller – James McDonald factor. (Paternal also hails from the Waller barn and will be partnered by Hugh Bowman, reigniting the “Winx Team.”)

Both the Doomben Cup and Queensland Derby will carry a purse of AU$1 million for the first time.

The Kingsford-Smith Cup, Race 9, is an AU$700,000 weight-for-age sprint at 6-1/2 furlongs. Favoritism will be disputed by 3-year-old Godolphin colt Paulele (4-1) and 5-year-old New Zealand mare Entriviere (7-2), who put forth terrific efforts when filling the minor placings in Mazu’s aforementioned Doomben 10,000 (also weight-for-age).

Both races lead towards the showpiece event of Brisbane’s Winter Carnival, the AU$1.5 million Stradbroke Handicap, at seven furlongs on June 10. It bears looking for eye-catching runs from horses who will benefit from a lighter weight under the Stradbroke’s handicap conditions.