Thousand Words 'with not a scratch' after flipping in paddock 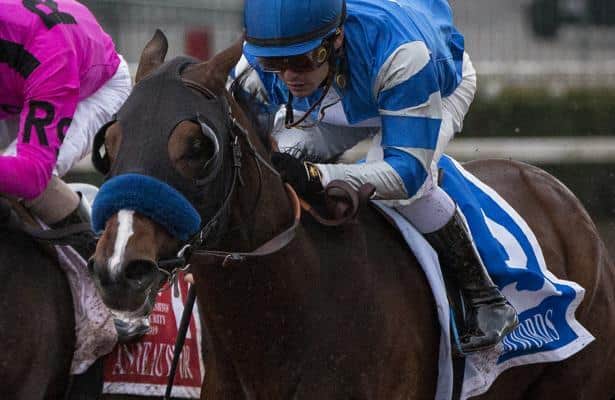 Before he won the 2020 Kentucky Derby with Authentic, Hall of Fame trainer Bob Baffert saw near disaster strike in the paddock, as Thousand Words -- his other Derby horse -- was scratched from the race after flipping in the paddock and knocking over assistant trainer Jimmy Barnes, who suffered a broken wrist.

While Barnes was on his way to a local hospital for further evaluation, Thousand Words was none the worse after the incident, according to veterinarian Dr. Kathleen Anderson.

"He did misbehave in the paddock and was scratched after he fell over onto his side," Anderson said. "He's returned to the stable and had a thorough examination by [his regular veterinarian].

After the examination, Thousand Words was cleared for service "with not a scratch upon him," according to Anderson.

Thousand Words, a son of Pioneerof the Nile out of Pomeroys Pistol, by Pomeroy, is owned by Albough Family Stables LLC and Spendthrift Farm LLC. He was purchased for $1 million at the 2018 Keeneland September yearling sale. He was to be ridden by Florent Geroux.